INTRODUCTION: Pain is sensorial modality, which in many cases represents the only symptom for the diagnosis of several diseases. It often has a protective function throughout history, and man has used several therapies for the management of pain 1. Medicinal herbs are highly highlighted due to their wide use and fewer side effects. An example is Papaver somniferum, from which morphine was isolated. It is regarded as a prototype of opiate analgesic drugs. For the relief of pain, an opiate generally acts on the central nervous system, exercising their effects through three receptors (µ, κ, and δ); such drugs are especially important for the treatment of chronic pain.

Although, morphine has reigned for centuries as the king of painkillers, its rule cannot be considered as totally benign. There are concerns regarding the side effects and addictive properties, which include respiratory depression, drowsiness, decreased gastrointestinal motility, nausea and several alterations of the endocrine and autonomic nervous system 2, 3.

Therefore, the currently used analgesics such as opiates and non-steroidal anti-inflammatory drugs are not useful in all cases; therefore there arises the requirement for a medicinally active plant. The plant Vitis or Cissus quadrangularis (Sanskrit - Asthishrinkhala, Vajravalli; Hindi - Harjor) belongs to the family Vitaceae and has been used as antihelminthic, dyspeptic, digestive tonic, analgesic in eye and ear diseases, scurvy, irregular menstruation, asthma,4-6 fractures of bones and for complains of the back and spine. Spirulina also called arthospira is a microscopic and filamentous cyanobacterium (blue-green algae) that has a long history of use as food Spirulina is 50-70% protein by weight and contain a rich source of vitamins B1, B2 and vitamin B12 (β- carotene provitamin A), vitamin E. It also contains carbohydrates like- rhamnose, fructose, ribose, mannose and some minerals like copper, magnesium, zinc, potassium and iron 7, 8. Spirulina platensis also contains phycobilisomes as light-harvesting protein-pigment complexes. Phycobilisomes are mainly (80–85%) composed of brilliantly colored polypeptides named phycobiliproteins. The two more important biliproteins in this microalgae are phycocyanin and allophycocyanin, both having the same chromophoric group 9, 10. Several studies show that Spirulina has anti-diabetic activity 11 and health improvement agent is gaining attention as a nutraceutical and a source of potential pharmaceutical 9. Spirulina has been found to be active against several viruses including HIV (AIDS virus) and has also been reported to possess immune - modulatory properties. Anti-carcinogenic and antioxidant effects have also been documented in Spirulina species. These properties were largely related to the Spirulina's phycobiliprotein phycocyanin.

Animals: Swiss albino rats of both sexes weighing 160-180 g were used for the study. The animals were housed in groups of six, under standard laboratory conditions of temperature (25 ± 2 °C), lighting (0800-2000 h), and relative humidity (50 ± 5%), with food and water freely available. All experiments were carried out during the light period (0800-1600 h). The Institutional Animal Ethical Committee approved the protocol of the study. All the procedures were performed following the Institutional Ethical Committee constituted as per the directions of the Committee for Control and Supervision of Experiments on Animals under Ministry of Animal Welfare Division, Government of India, New Delhi, India.

Administration of the Extracts: Oral suspensions of the Spirulina platensis were prepared in distilled water using sodium carboxymethyl cellulose (0.3% w/v) as the suspending agent. The oral suspension was administered in a dose of 200 and 400 mg/kg to rats by the oral route, 60 min before the test procedures. Control groups were given only the vehicle (0.3% w/v Na CMC solution) in a volume equivalent to that of the oral suspension and drugs.

Formalin-Induced Paw Licking: Male Swiss mice 25-30 were used. 10 µl of 1% formalin (0.92% formaldehyde) made in the phosphate buffer was injected under the paw surface (subplantar region) of the right hind paw. Four groups (one group as a control, two groups as drugs treated and last group as a standard drug) were observed simultaneously from 0-30 min following formalin injection. The amount of time spent licking the injected the paw was noted. The initial nociceptive response normally 5 min after formalin injection (phase 1) and 15-30 min after formalin injection (phase 2) represent neurogenic pain and inflammatory pain respective 12.

Acetic Acid-Induced Writhing: Mice were divided into four groups, of six mice each and pre-treated as follows: group I received the only vehicle which was served as control, group II received standard drug pentazocine (10 mg/kg, i.p.) respectively. Groups III and IV received 200 and 400 mg/kg p.o., with pre-treatment time of 1 h. Each group was administered 10 ml/kg body weight (i.p.) of an aqueous solution of acetic acid (0.6%). The mice were then observed for the number of abdominal constrictions and stretching, counted throughout 0-20 min. The percentage inhibition was determined for each experimental group as follows: 13

RESULTS AND DISCUSSION: Two different animal models were employed to investigate the potential antinociceptive activity of Spirulina platensis in this study. The methods for investigating antinociception were selected such that both centrally and peripherally mediated effects were investigated. The acetic acid-induced abdominal constriction elucidated peripheral and central activity respectively while the formalin test investigated both. 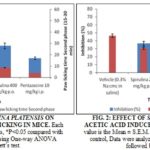 The activity was dose-dependent that reached optimum at 200 mg/kg which was comparable to the reference drug. The acetic acid-induced writhing method is widely used for the evaluation of peripheral antinociceptive activity 14. It is also called as the abdominal constriction response. It is very sensitive and able to detect the antinociceptive effects of compounds and dose levels that may appear inactive in other methods. Therefore, the acetic acid-induced writhing strongly suggests that the mechanism of this drug may be linked partly to lipooxygenase and cyclooxygenase.

In the formalin test, there is a distinctive biphasic nociceptive response termed the early and late phase. Drugs that act primarily on the central nervous system inhibit both phases equally while peripherally acting drugs inhibit the late phase 15. Inhibition of the late phase is due to inflammation with a release of serotonin, histamine, bradykinin and prostaglandins and at least to some degree. Suppression of both phases of pain as observed with the drug (400 mg/kg) in this study also lends strong credence to the presence of both central and peripheral effects.

CONCLUSION: The present study showed that the leaves extract of Spirulina platensis exhibit a potent antinociceptive activity. Further advanced inquisitions are suggested to elucidate the underlying mechanism as well as to asunder the bioactive compounds responsible for the pharmacological activity. This study has contributed to the validation of the medicinal potential of extracts of leaves of Spirulina platensis.

ACKNOWLEDGEMENT: The authors are grateful to the head of the pharmacy discipline, Sagar Institute of Research Technology & Science-Pharmacy Bhopal (M.P.) for permitting the lab facilities.