ABSTRACT: Cadaba fruticosa (L.) Druce belongs to the family Capparaceae. It is woody, erect, glandular- pubescent shrubs. It is used in the folk system of medicine. Anti-rheumatic, anthelmintic and antibacterial properties it is also used in gastrointestinal, urine complaints and as a vermicide.  Leaves used on boils and the leaf juice of this plant are used as a remedy for fevers and is primarily used to cure gonorrhea. Leaves amphistomatic with anisocytic stomata. Trichomes occur on both surfaces. Leaf surface striated. Mesophyll with palisade and spongy tissues. Ground tissue of midvein consists of collenchyma, parenchyma, and scleren-chymatous tissues. Hypodermis collenchyma 1-2 layered on either side. Beneath the collenchyma, parenchymatous tissue is present with small intercellular spaces. Vascular bundles are surrounded by sclerenchymatous tissue.

The plant is used for the treatment of anti-rheumatic, anthelmintic and antibacterial properties it is also used in gastrointestinal.

MATERIALS AND METHODS: Cadaba fruticosa (L.) Druce was collected from Nalgonda district, Telangana and deposited in Herbarium Hyderabad, Department of Botany, Osmania University. Identified through standard Floras. The leaves were boiled, fixed in F.A.A. (Formaldehyde-Acetic acid-Alcohol), dehydrated through xylene- alcohol series, and embedded in paraffin wax. The sections obtained by rotary microtome and stained with crystal violet and Basic fuchsin combination mounted in Canada balsam 6. Epidermal cells were obtained by gently scraping by razor blade then peels stained with saffranine and mounted in glycerin. Microphotographs were taken with the help of a CCD camera. 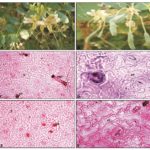 Petiole: Petiole cylindrical. The trace enters the petiole base as ‘C’ shaped arc whose arms are very close. Higher above, only in the base, these arms curve and meet each other. Later the ends of the arm get detached from the main vasculature get fused and as a result, a vascular trace enclosed within arc is produced. Ends of arc remain separate by sclerenchyma. Higher above arms of vasculature meet to form a ring around the central enclosed vascular bundle. At the same time, the central bundle develops fibrous sheath. Main vasculature surrounded by pericyclic sclerenchyma, cortex parenchymatous. Again at the base of lamina, the medullary bundle divides into two. 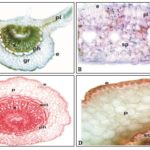 The traces are pushed on the upper side and join the main cylinder which opens to form a ‘C’ shaped arc with incurved arms Fig. 2C-D.

DISCUSSION: Little anatomical data is available for comparison. Findings of the present investigation are discussed in the light of data given by Metcalfe and Chalke (1972) 7. Peltate glandular trichomes found in Cadaba fruticosa are reported in species of Cadaba by earlier authors also. Emergences resembling hairs reported earlier in Cadaba species are absent from present species. Trichomes with the bulbous base are reported for the first time. Capparaceae are with anomocytic stomata, however, here anisocytic stomata are present. Both centric and dorsiventral mesophyll reported in the family.

In the present species, palisade is either distinct, single layered or 2-3 layered or may be homogeneous 8. Such a varied type of mesophyll appears to be the characteristic feature of Cadaba fruticosa. The transition in the vascular architecture of petiole is also an interesting feature. Petiole structure varies in Capparidaceae. Petiole architecture of C. fruticosa appears to be a combination of Cadaba linearise Jacq. and Stereophoma elipticum (DC) Spreng.

CONCLUSION: This study will help for the identification of Cadaba fruticosa (L) Druce in fresh and powder form; it can also be useful for standardization purpose.

ACKNOWLEDGEMENT: The authors wish to thank the Head Department of Botany, Osmania University for providing the laboratory facility and constant encouragement. Authors also thankful To UGC, New Delhi for Financial Support in the form of   BSR -RFSMS Fellowship.