ABSTRACT: Anatomical characters and thin layer chromatographic fingerprint of root, root-bark and leaf of Agnimanthaḥ (Premna serratifolia L.), an important drug used in Ayurvedic system of medicine has been studied in detail to identify the original drug from the substitutes/adulterants.

Though Premna serratifolia is the accepted source of agnimanthaḥ throughout Kerala, which is the main center where Ayurveda has survived through centuries, however, commercial drug invariably mixed with Premna species. Hence, it necessitates standardizing the original drug from adulterants.

Anatomical Studies: Fresh root, root-bark, and leaves were collected from the authentic plant (12 years old) grown in R & D center campus, Cholayill Pvt. Ltd., Ambattur, Chennai. The samples were cut into small pieces and fixed immediately in Formalin-Acetic-Alcohol for 24 h. After fixation they were washed thoroughly in distilled water, dehydrated, embedded in paraffin wax after infiltration and sectioned using rotary microtome to the thickness of 8 - 12 µm.

Sections were stained with toluidine blue and photographed. For the study of individual wood elements, wood tissues were macerated employing Jeffrey’s fluid. For leaf clearing, small pieces were treated in 5% NaOH at 60 °C for 3 h, washed with distilled water thoroughly and stained with safranin 16.

Thin Layer Chromatographic (TLC) Analysis: For the TLC analysis, root, root-bark and leaves samples were shade dried for a week and powdered. 2 g of each powdered sample was refluxed with 10 ml of ethyl acetate in a water-bath at 60 °C for 30 min, consecutively 3 times, and then concentrated and dried. The final extract was re-dissolved in ethyl acetate and used for the TLC analysis. Precoated Silica Gel F254 (Merck) plate was used for the stationary phase and chloroform: methanol (9:1) was used as mobile phase. After development, the plate was observed under UV-254 nm and spots recorded. Then the plate was dipped in 0.5% Anisaldehyde sulphuric acid and heated at 105 °C in a hot air oven for 5 min to develop the color and the spots recorded.

Macroscopic Characters of the Root-Bark (Fig. 2: 1 - 2): The bark has a thickness of about 8 to 10 mm, brown color outer side, pale white inner side, rough surface with peelable fakes and longitudinal furrows, prominent rootlet scars with a characteristic odor. 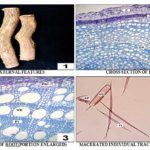 FIG. 1: MACROSCOPIC AND MICROSCOPIC FEATURES OF ROOT OF PREMNA SERRATIFOLIA

Petiole (Fig. 3: 2): The petiole in transverse sectional view cubical in shape with the distinct concave adaxial surface. The epidermis is a single layer, cubical shaped cells with trichomes. Next to the epidermis 4 - 5 layers of collenchymatous cells present. A large dorsal vascular bundle and two small ventral vascular bundles are present.

Thus, the arrangement is expressed as 1 + 2. The dorsal vascular bundle consists of a central main bowl-shaped xylem and phloem. Patches of sclerenchyma cells covered the phloem. The ventral vascular bundles are somewhat elongate of circular. The center region of ground tissue is made up of large parenchymatous cells. Calcium oxalate crystals are no evident.

Lamina (Fig. 3: 3 - 5): The midrib has convex in the adaxial surface, a single layer epidermis having cuboid shape cells with a thick cuticle. Three to four layers of collenchyma cells followed by epidermis. A bowl-shaped large vascular bundle in the dorsal side and small circular shaped vascular bundle in ventral side consisting xylem and phloem. Patches of sclerenchyma surrounded the phloem region. The center ground tissue is made up of parenchymatous cells. 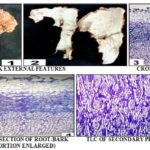 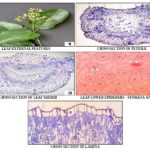 FIG. 3: MACROSCOPIC AND MICROSCOPIC FEATURES OF LEAF OF PREMNA SERRATIFOLIA

Thin Layer Chromatographic (TLC) Analysis (Table 1; Fig. 4): The Rf - values, and color of the spot shown in Table 1 and Fig. 4 can largely distinguish the parts of the plant. 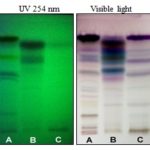 TABLE 1: THE TLC PROFILE AND Rf  - VALUES OF LEAF, ROOT-BARK, AND ROOT AS FOLLOWS

DISCUSSION AND CONCLUSION: Ayurveda - the ancient indigenous system of medicine is being discovered in our own country and day by day increasing its popularity. The major disadvantage of the Ayurvedic system is the difficulty in identifying the genuine drug prescribed by the founders. Their description of medicinal plants is more poetic than scientific and lacks accuracy because the language they have used is not technical and they did not follow a systematic format for describing the plants. So, this leads to the erroneous identification of more than one plant as the same raw drug by different authors.

Today several plants are used as substitutes for the genuine ones, and the use of such plants is increasing day by day 12. Agnimanthaḥ is such a controversial plant and various plants viz., P. obtusifolia, P. latifolia, P. mucuronata, C. phlomidis, C. inerme are substituted or adulterated to the genuine drug P. serratifolia. Hence, the present investigation was undertaken to provide detailed anatomical features and TLC profile of root, root-bark and leaf of P. serratifolia for the identification purpose. The following anatomical features aid largely to identify the drug in fragmentary form.

ACKNOWLEDGEMENT: The authors are thankful to Mr. Pradeep Cholayil, Chairman and Managing Director and Mrs. Jayadevi Pradeep Cholayil, Directress - Cholayil Private Limited for their support and encouragement in carrying out the study.