INTRODUCTION: Apricot known as Prunus armeniaca (L.) Fig. 1 which belongs to Rosaceae family is a fruit that grows in the apricot tree. Although apricot is distributed geographically to almost all parts of the world, it has mostly spread to Europe, Africa, America and Central Asia continents, and found growth areas in countries close to the Mediterranean. Apricot is one of the most traded fruits in the World 1. Although, apricots are produced anywhere in Turkey, the majority of apricots are produced in the Eastern Anatolia Region of Turkey. The most important apricot production centers are Malatya, Erzincan, Aras Valley (Igdir-Kagizman), Mersin (Mut), Elazig, Sivas, Kahramanmaras, Kayseri, Ankara, Hatay, Nigde, and Nevsehir 2.

The apricot fruit which has different types contains vitamins A, B, C and E also has beta-carotene, high levels of potassium, iron, protein, pectin, and some organix substances. The apricot kernel has an important place in terms of nutritional value since it contains 40-50% edible fat besides the abundant protein and mineral content. Apricot kernel oil is rich in unsaturated fatty acids, and important parts of these are oleic and linoleic fatty acids 3. An active ingredient named Amygdalin, one of the components of apricot kernel and one of the most effective herbal ingredients used against cancer is the main component of a cancer drug called "Laetrile" on the market.

In addition, apricot kernel oil is used in the treatment of asthma, cough, constipation, and as massage oil, it's also used in make-up products owing to its nourishing and moisturizing properties 4. The general formulas of saturated fatty acids are shown as CnH2nO2 or CH3(CH2)n-COOH. Generally, their chains have an even number of carbon atoms. Carbon atoms are connected to each other in a single bond. Fatty acids containing one or more double bonds between different carbon atoms on carbon chains are referred to as unsaturated fatty acids 5. Linoleic acid, linolenic acid and arachidonic acid are essential for humans; that is, they cannot be synthesized in the body, they must be taken through nutrition. 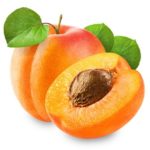 Chemicals and Reagents: Analytical purity chemicals were used in the study. The n-hexane and methanol used in the derivatization processwere purchased from Sigma-Aldrich (Sigma Aldrich Chemie GmbH, Steinheim, Germany). Karden, Organix and Biovitals brand apricot kernel oils used in the analysis were obtained from a herbal store.

Derivatization Procedure: In the GC study, volatilization of fatty acids was carried out by conversion to methyl ester derivatives. Because in this method, samples must be volatile or turn into volatile. For this purpose, according to the following procedure, the oil samples to be analyzed were volatized by methylation reaction. 0.1 ml oil sample was taken into a 15 ml plastic centrifuge tube and 10 ml n-hexane was added to it. Then, the centrifuge tube was shaken strongly. After that, 0.5 ml of 2 M methanol KOH solution was added to the tube. The centrifuge tube was shaken strongly again. After the sample tube was kept in the dark for 2 h, 1 ml of the organix phase in the sample tube was put in the GC vial and GC-MS analysis was performed.

Identification of Components: Identification was based on the molecular structure, molecular mass and calculated fragments. Interpretation on mass spectrum GC-MS was conducted using the database on National Institute of Standard and Technology (NIST) having more than 62,000 patterns. The name, molecular weight and structure of the components of the test materials were ascertained. The relative percentage amount of each component was calculated by comparing its average peak area to the total areas. The spectrum of the unknown component was compared with the spectrum of the component stored in the NIST Library Version (2005), Software, Turbo mass 5.2.

GC-MS Analysis: The more precise information in qualitative analysis can be obtained by GC-MS. For quantitative determination, gas chromatography with flame ionization detector (GC-FID) and GC-MS are preferred. GC-MS is one of the best techniques to identify the constituents of volatile matter, long chain, branched chain hydrocarbons, alcohols, acids, esters etc.

The GC-MS analysis of three different apricot kernel oils revealed the presence of various fatty acids. The identification of the fatty acids was confirmed based on the retention time, molecular formula and mass spectrum. The major fatty acid constituents as methyl esters of Organix branded apricot kernel oil are presented as compound chromatogram in Fig. 2. 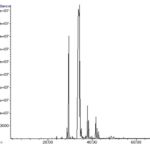 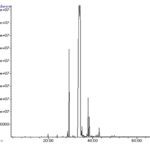 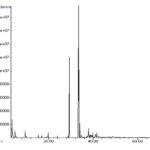 The choice of methods to be used in the analysis of fatty acids is made according to the environment and laboratory conditions in which the analysis is performed. After the analytical method has been developed for an analysis, the optimization conditions of the method must be determined to demonstrate that this method is applicable. GC-MS analysis revealed the presence of various fatty acid compounds as methyl esters in apricot kernel oils. Peak number, retention time, compound name and molecular formula are stated in Table 1. According to our analysis results, major compounds of apricot kernel oil are linoleic, oleic, palmitic and stearic fatty acids. Linoleic acid is a fatty acid. It is an 18-carbon chain with two double bonds in cis configuration. A shorthand notation like "18:2 (n-6)" or "18:2 cis-9, 12" may be used in literature6.It typically occurs in nature as a triglyceride ester; free fatty acids, the form not combined with glycerol to form triglyceride, are typically low in foods 7. It is very soluble in acetone, benzene, diethyl ether and ethanol 8. It is found in the lipids of cell membranes. It is abundant in many nuts, fatty seeds (flax seeds, hemp seeds, poppy seeds, sesame seeds, etc.) and their derived vegetable oils; comprising over half (by weight) of poppy seed, safflower, sunflower, corn, and soybean oils 9.

The consumption of linoleic acid is vital to proper health, as it is an essential fatty acid 10. In rats, a diet deficient in linoleate (the salt form of the acid) has been shown to cause mild skin scaling, hair loss 11, and poor wound healing 12. However, chronic consumption of high levels of linoleic acid may be associated with the development of ulcerative colitis 13. Linoleic acid has become increasingly popular in the beauty products industry because of its beneficial properties on the skin. Research points to linoleic acid's anti-inflammatory, acne reductive, skin-lightening and moisture retentive properties when applied topically on the skin 14-17.

Since, it is among the essential fatty acids, it is worth mentioning about linolenic acid as well.Linolenic acid is divided into two groups; alpha linolenic acid and gamma linolenic acid. Alpha linolenic acid or ALA (α-linolenic acid), (from Greek linon, meaning flax), is an n-3, or omega-3 essential fatty acid. ALA is found in many seeds and oils, including flaxseed, walnuts, chia, hemp, and many common vegetable oils. ALA can only be obtained by humans through their diets because the absence of the required 12- and 15-desaturase enzymes makes “de novo synthesis” from stearic acid impossible. Eicosapentaenoic acid (EPA; 20:5, n-3) and docosahexaenoic acid (DHA; 22:6, n-3) are readily available from fish and algae oil and play a vital role in many metabolic processes. These can also be synthesized by humans from dietary α-linolenic acid: ALA → stearidonic acid → eicosatetraeonic acid → eicosapentaenoic acid → docosapentaenoic acid → 9, 12, 15, 18, 21-tetracosapentaenoic acid → 6, 9, 12, 15, 18, 21-yetracosahexaenoic acid → docosahexaenoic acid, but with an efficiency of only a few percent18.Because the efficacy of n−3 long-chain polyunsaturated fatty acid (LC-PUFA) synthesis decreases down the cascade of α-linolenic acid conversion, DHA synthesis from ALA is even more restricted than that of EPA 19, 20. According to one scientific review, higher ALA consumption is associated with a moderately lower risk of cardiovascular disease, but wide variation in results across multiple studies highlights the need for additional research before drawing firm conclusions 21.

Gamma-Linolenic acid or GLA (γ-linolenic acid), (INN and USAN gamolenic acid) is a fatty acid found primarily in vegetable oils. When acting on GLA, arachidonate 5-lipoxygenase produces no leukotrienes and the conversion by the enzyme of arachidonic acid to leukotrienes is inhibited. GLA is categorized as an n-6 (also called ω-6 or omega-6) fatty acid, meaning that the first double bond on the methyl end (designated with n or ω) is the sixth bond. In physiological literature, GLA is designated as 18:3 (n-6). GLA is a carboxylic acid with an 18-carbon chain and three cis double bonds. It is an isomer of α-linolenic acid, which is a polyunsaturated n-3 (omega-3) fatty acid, found in rapeseed canola oil, soybeans, walnuts, flax seed (linseed oil), perilla, chia, and hemp seed. GLA is obtained from vegetable oils such as evening primrose (Oenothera biennis) oil (EPO), black-currant seed oil, borage seed oil, and hemp seed oil. GLA is also found in varying amounts in edible hemp seeds, oats, barley 22 and spirulina. Normal safflower (Carthamus tinctorius) oil does not contain GLA, but genetically modified GLA safflower oil available in commercial quantities since 2011 contains 40% GLA 23.

Borage oil contains 20% GLA, evening primrose oil ranges from 8% to 10% GLA, and black-currant oil contains 15-20% 24. It also constitutes 12.23% of the fats from the fruit of the durian species Durio graveolens 25. The human body produces GLA from linoleic acid (LA). This reaction is catalyzed by Δ6-desaturase (D6D), an enzyme that allows the creation of a double bond on the sixth carbon counting from the carboxyl terminus. LA is consumed sufficiently in most diets, from such abundant sources as cooking oils and meats. However, a lack of GLA can occur when there is a reduction of the efficiency of the D6D conversion (for instance, as people grow older or when there are specific dietary deficiencies) or in disease states wherein there is excessive consumption of GLA metabolites 26.

Oleic acid is a fatty acid that occurs naturally in various animal and vegetable fats and oils. It is odourless, colourless oil, although commercial samples may be yellowish. In chemical terms, oleic acid is classified as a monounsaturated omega-9 fatty acid, abbreviated with a lipid number of 18:1 cis-9. It has the formula CH3 (CH2) 7CH=CH (CH2) 7COOH 27. The name derives from the Latin word oleum, which means oil 28. It is the most common fatty acid in nature. The salts and esters of oleic acid are called as oleates. Fatty acids (or their salts) do not often occur as such in biological systems. Instead fatty acids like oleic acid occur as their esters, commonly triglycerides, which are the greasy materials in many natural oils. Oleic acid is the most common monounsaturated fatty acid in nature. It is found in fats (triglycerides), the phospholipids that make membranes, cholesterol esters, and wax esters 29. Triglycerides of oleic acid comprise the majority of olive oil. It is abundantly present in many animal fats, constituting 37 to 56% of chicken and turkey fat 30. Oleic acid is the most abundant fatty acid in human adipose tissue 31 and second in abundance in human tissues overall only to palmitic acid 32. Palmitic acid, or hexadecanoic acid in IUPAC nomenclature, is the most common saturated fatty acid found in animals, plants and microorganisms 33. Palmitic acid is naturally produced by a wide range of other plants and organisms, typically at low levels. It is naturally present in butter, cheese, milk, and meat, as well as cocoa butter, soybean oil and sunflower oil. Karukas also contain 44.90% palmitic acid 34. According to the World Health Organization, evidence is "convincing" that consumption of palmitic acid increases the risk of developing cardiovascular disease 35, based on studies indicating that it may increase LDL levels in the blood.

The resulting mixture is then distilled 37. Commercial stearic acid is often a mixture of stearic and palmitic acids, although purified stearic acid is available. Fats and oils rich in stearic acid are more abundant in animal fat (up to 30%) than in vegetable fat (typically <5%). The important exceptions are the foods cocoa butter and shea butter, where the stearic acid content (as a triglyceride) is 28-45% 38. When the results obtained from these analyzes are compared with the data in previous studies, it is seen that the apricot kernel oils’ fatty acid profiles are generally similar. Three different apricot kernel oils we studied on have a similar fatty acid profile, but there is no specific standard between them.