ABSTRACT: Hamelia patens Jacq. (Rubiaceae) also known as firebush is an ornamental plant native to Florida and has been used traditionally in a number of conditions, including diabetes, pain, skin diseases, respiratory problems, dysentery, etc. This review aims to provide an overview of the plant profile, its phytoconstituents and pharmacological activities. Alkaloids of indole and oxindole class like rumberine, pteropodine, isopteropodine, mitrajavine, flavonoids like kaempferol-3-O-rutinoside, 7-0-a-L-rhamnopyranoside, 5, 7, 2’, 5’tetrahydroxyflavanone 7-D-gluco-pyranoside, (-) epicatechin, 5, 7, 2’, 5’- tetrahydroxyflavanone, narirutin and rosmarinic acid, carbohydrate, proteins and tannins have been identified and isolated from firebush. Different extracts of different parts of Hamelia patens have shown various pharmacological activities like antioxidant, antimicrobial, anthelmintic, antidepressant, acetylcholinesterase inhibitory, antilithiatic, hepatoprotective, wound healing, blood sugar lowering, cytotoxic and nanotechnological research has also been conducted. Further research is required for the identification and isolation of bioactive constituents, which might be used as potential drugs in the near future.

INTRODUCTION: Nature has been providing remedies for almost all diseases since times immemorial. The shift towards plants for the discovery of new entities is tremendously increasing as plants are a safer and cheaper alternative to synthetic drugs. With the emerging diseases, the focus towards natural resources for their cure is also increasing. Hamelia patens Jacq. commonly-known as firebush, scarlet bush, hummingbird bush, and by many other vernacular names, is an ornamental plant native to Florida. This plant has been investigated for a number of biological activities, and many bioactive constituents have been identified and isolated from different parts of the plant.

This review summarizes the profile of the plant in terms of its activities and phytochemical constituents.

1.1. Plant Description: Hamelia patens Jacq. belonging to the Rubiaceae family is an ornamental plant native to tropical America and grows in a tropical or subtropical climate. It is an evergreen tree consisting of orange-red tubular flowers 1. The genus Hamelia Jacq. consists of woody shrubs (Wealth of India) and is distributed from Florida and Mexico to Paraguay. There are two sections in this genus: section Hamelia and section Amphituba. The Hamelia section has red, orange, or yellow tubular flowers, and section Amphituba consists of yellow infundibular or trumpet-shaped flowers 2.

1.1.4.   Description: The plant is a shrub or small tree with year-round flowering and grows to about 6-12 ft. height and spreads to about 5-8 ft. It can be propagated by seeds, cuttings, or air layers 12.

1.1.5. Distribution: Scarlet bush is found throughout tropical and sub-tropical America. It is widespread from Mexico to Paraguay. It is also indigenous to Bahamas and Caribbean 2.

1.2 Plant morphology: Leaves are simple, elliptic to ovate, light green or dark green varying to purplish or red depending upon cultivars with entire blade, wavy margin and short petiole (about 1 - 1/2 inches long); arranged in whorls of 3-5 leaves Fig. 1 and about 3 - 8 inches long and 1 - 4 inches wide. The surface is glabrous with villous hairs on both upper and lower side12 Fig. 2. 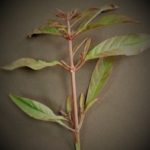 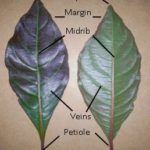 Flowers are arranged in cymes with forked terminal and axillary inflorescence with Long and stamens inserted within a fused corolla tube.

The color changes from yellow to orange when buds mature, ultimately becoming orange-red upon pollination 2, 12 Fig. 3. 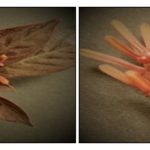 Stem are greenish-brown with 0.5 to 1.2 cm diameter and cylindrical shape 13 Fig. 4. Fruits are edible with oval to elliptic shape Fig. 5A and green in color changing to red while ripening and ultimately to purplish-black when mature Fig. 5B 12, 4. 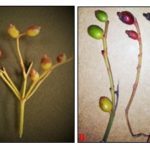 2. Phytoconstituents: Biosynthesis and production of monoterpenoid indole and oxindole alkaloids was studied by elicitation using jasmonic acid as elicitor 19. Tryptophan, glutamine, glutamic acid, sucrose, chlorogenic acid, p-coumaric acid and strictosidine along with monoterpenoid oxindole alkaloids palmirine and pteropodine were found to be prominent in plants treated with jasmonic acid and loganic acid, aspartic acid, acetic acid, and glucose were high in control plants which was in accordance to analysis from Methanol/Water fractions. Increased level of 1-deoxy-D-xylulose-5-phosphate synthase, strictosidine synthase, and STR activity was followed by increased levels of isopteropodine, pteropodine, rumberine, specio-phylline, palmirine, and hameline in treated plants. Tryptophan was also confirmed to be a precursor of MIA and MOA via the shikimate pathway.

Quantitative Estimation: Starch, protein, lipid, and phenol content of various parts of H. patens were quantitatively evaluated. The results are summarized in Table 3 33.

Total Phenols: Quantitative estimation of total phenolic content (T.P.C.) of different extracts of the plant has been done by several researchers, as given in Table 4.

Antioxidant Activity: Various extracts of Hamelia patens has been evaluated for antioxidant activity using different assays, and the results obtained are summarized in Table 5.

Along with 22 Mexican species, free radical scavenging and antioxidant activities of hexane, acetone, and methanol extracts of the aerial parts of H. patens were studied. The β-carotene bleaching method and DPPH radical scavenging assay were used. Methanolic extract was found to have greater antioxidant activity than acetone least activity was observed in the hexane extract of Hamelia patens. H. patens showed similar activity as BHA (Butylated Hydroxyl Anisole) and higher activity than natural anti-oxidant like α-tocopherol 9.

Anti-inflammatory Activity: Hexane, chloroform, and methanolic extracts of the plant have been evaluated for topical anti-inflammatory activity using croton oil ear edema mice model and chloroform extract was found to have the highest activity with ID 255 µg/cm2 which was comparable to indomethacin (ID50 = 93 µg/cm2) 38. In carrageenan-induced paw edema in rats (oral) and TPA (12- tetradecanoylphorbol-13-acetate) induced ear edema in mice (topical), HEX extract at 500 and 200 mg/kg b. wt significantly decreased the inflammation. The highest myeloperoxidase activity inhibition was shown by MeOH–EtOAc (83.5%) 30.

Anticancer Activity: Studies conducted to evaluate its cytotoxic activity with the cells used, and results obtained are summarized in Table 6.

Blood Sugar Lowering Activity: HEX, DCM–EtOAc, MeOH–EtOAc, and MeOH–Aq. extracts were evaluated for in vitro α-glucosidase inhibition. The highest inhibition was exhibited by HEX extract with IC50 value was 26.07 mg/ mL 30. The ability of crude and fractional methanolic extracts to reduce blood glucose levels in streptozotocin-induced hyperglycemia was evaluated.

All the extracts normalized the glucose level after 10 administrations. Epicatechin and chlorogenic acid out of the five compounds identified in the extracts demonstrated Anti-hyperglycemic activity 27 and may be considered responsible for the activity. Alloxan induced diabetes in rats has also been used to investigate the anti-diabetic activity of petroleum ether and ethanolic extracts of H. patens (100 and 400 mg/kg). Both the extracts reduced blood glucose level, total cholesterol, and total triglycerides significantly in a dose-dependent manner, which was comparable to that of Standard drug glibenclamide (10 mg/kg, body wt.).

Antidepressant: Chloroform and methanolic extracts were investigated for antidepressant activity in mice.

Acetylcholinesterase Inhibitory: Docking after GC-MS analysis of a methanolic extract of H. patens leaves was done.

Acetylcholinesterase inhibitory activity of the extract was studied both in-vitro and in-vivo on the brain of Danio rerio (zebrafish), which was found to be significant 50.

Toxicity Studies: The LD50 of 500-500 mg/kg b. wt. of H. patens leaves ethanol extract was found to be 2964 mg/kg b. wt. i.p. and >5000 mg/kg b. wt. p.o (peroral) acute and subacute toxicity studies respectively 47. Some other pharmacological activities evaluated by researchers are summarized in Table 8.

CONCLUSION: Hamelia patens are rich in bioactive constituents which might be responsible for its various pharmacological activities. Various extracts of leaves, flowers, stems and roots of the plant as well as the major constituents isolated have shown potent activities.

Further, research is needed to identify and isolate bioactive ingredients that would be beneficial in various diseases and may reduce dependence on synthetic drugs.