Categories Menu
Home » AN OVERVIEW ON CAMELLIA SINENSIS AS ANTIASTHMATIC

AN OVERVIEW ON CAMELLIA SINENSIS AS ANTIASTHMATIC

AN OVERVIEW ON CAMELLIA SINENSIS AS ANTIASTHMATIC

ABSTRACT: The present era aims to use medicinal plants and their constituents to treat various diseases. The synthetic drugs available in the market are associated with various side effects and follow a tedious and time-consuming process to synthesize. Natural drugs are safe and possess a large therapeutic window, thus gaining interest in the present scenario. These natural drugs are lacking in terms of their receptor action, so the present scenario aims to extract the active constituents of herbal drugs and study their profile aiming at a particular disease. In the present review, we presented the antiasthmatic potential of caffeine (extracted from tea leaves) by studying its effect on adenosine receptors. Our main aim is to study the active constituent present in a specific part of the plant to be extracted and used specifically for a specific receptor instead of the whole plant.

INTRODUCTION: Disease cannot be defined as the opposite of health as there is no single definition to define health; thus, defining disease is challenging. As defined by WHO (1946), health is a state of complete physical, mental and social well-being, not merely the absence of disease or infirmity. In the present scenario, a rise in the number of infectious diseases can be observed especially related to the respiratory system. Asthma is one of the respiratory system's leading diseases and affects about 50-60% of world's population. Asthma can be defined as a chronic, obstructive and inflammatory disorder of pulmonary airways associated with airways inflammation and hyperresponsiveness due to some stimulus resulting in constriction of bronchioles 1.

Asthma is considered one of the chronic and serious allergic diseases. The Global Strategy for Asthma Management and prevention defines asthma as “a chronic inflammatory disorder of the airways in which many cells and cellular elements play a role.” The chronic allergy and inflammation result in repeated episodes of sneezing, breathlessness, chest tightness and coughing. These episodes are more prevalent at night or in the early morning. These episodes result in an obstruction of airways which is usually reversible spontaneously or with treatment.

The airways obstruction is due to muscle contraction or hypersecretion resulting in airway tissue reactions 2. A number of drug management groups, such as the National Institutes of Health (USA), the Global Initiative for Asthma (GINA), and the Japanese Society of Allergology (JSA) have given various prevention and management guidelines for asthma prevention 3-7. These guidelines are both for treatment and prevention in adults and children, but complete remission is difficult 2.

India reports 15-20 million asthmatic patients, in which almost 15% are between the age of 5-10 years. There are a number of factors that play an important role in the occurrence of this disease. These include gender, age, family history of asthma, atopy history, lower socioeconomic status, and urbanization 8. The common cause of sneezing in rural areas is usually smoking, intake of paracetamol, air pollution due to traffic, and cat exposure 9. The most accepted treatment of asthma includes the use of Bronchodilators and corticosteroids. Among herbal drugs, caffeine, an ingredient of Tea leaves, acts as a bronchodilator to provide symptomatic relief.

Caffeine: Caffeine is usually found as one of the ingredient in coffee, tea, cocoa and cold drinks. The term Caffeinated drinks is used for drinks containing caffeine. Caffeine on a temporary basis makes one feel more energetic, awake, and focused by stimulating CNS. The major source of caffeine is Tea leaves, i.e., Camellia sinensis. Each type of tea comes from a different species of C. sinensis.

Camellia Sinensis: C. sinensis is known by different names, which varies from country to country and region to region. Following is the list of few common names of plant C. sinensis. 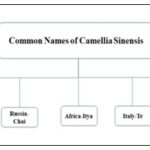 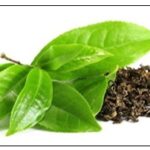 Morphology of C. sinensis: Camellia sinensis, a plant of the Araceae family found as an evergreen tree or a shrub that usually grows upto a height of 10-15 meter in the wild species; when cultivated, it grows around 0.6-1.5 meters.

The leaves of this plant are green in colour Fig. 1, short-stalked, alternate, lanceolate, serrate margin, glabrous or pubescent beneath, which varies from 5-30 cm in length and 4 cm wide. As the leaves mature, they turn bright green in colour and leathery in touch. The flowers are white in color, fragrant with around 2.5-4 cm diameter, and usually found in clusters of 2-4 10. The fruit part is flat, smooth, round 3 cell capsule and almost of size of small nut 11.

Varieties of C. sinensis: The plant Camellia sinensis is a native of China and grows in cold weather and at altitudes. It is usually found in two main varieties yielding different types of tea with different characteristics, such as white tea and green tea. Green tea is not oxidized and is usually pan-fried to prevent it from oxidation 12. Camellia sinensis as samica, another variety is known as Assam or Indian tea and is native to the Northern region of Assam. It is more tropical than the Chinese variety and grows larger due to warm temperatures and heavy rainfall.

Origin: The tea plant was discovered by accident around 2737 B.C.E. An emperor of that time was boiling water in his garden and a leaf of C. sinensis tree fell into that pot. This combination resulted in a drink that forced him to do further research on that plant, including medicinal and palatable properties.

Cultivation: The plant C. sinensis usually grows in tropical climates, but the Chinese variety can even grow in cooler and higher altitude climates. In US, tea usually grows in the subtropical region of the southeast in Hawaii and in the cool climate of the Pacific Northwest. Some gardeners grow this plant as a shrub resulting in a small tree, but some cultivators believe that the taller the plant, the larger the root structure, and the more nutritious and flavourful the tea is. This plant usually grows in well-drained sandy soil and should be harvested after three years of age.

Harvesting: Harvesting of tea leaves is done by hand as only top leaves are required to be plucked. During harvesting, only young top leaves are plucked having small tips. While plucking a small portion of the stem having 2-5 leaves and tip is included, this is known as ‘golden flush’. During warm months, the plant grows strong so tea is harvested during this month. So, there are only 4 months of harvesting in northern regions, while in tropical areas, harvesting can be done up to 8 months.

Composition of Tea: Tea usually contains thousands of bioactive compounds such as carbohydrates, polyphenols, flavonoids, amino acids, and volatile substances, among which 1/3rd constitute polyphenols. Polyphenols contain benzene rings bonded together by -OH groups. Polyphenols include flavonoids, non-flavonoids, and alkaloids, but only flavonoids 13 and alkaloids are present in tea. These are secondary metabolites obtained by a reaction of cinnamic acid with three malonyl CoA and acts as a defense mechanism against insects and animals. The major flavonoids present are flavanols, anthocyanidins, flavones, flavanones and isoflavonoids 14, responsible for the health claim of tea possessing antioxidant properties. The alkaloids present are caffeine, theobromine, and theophylline, which add bitterness to tea.  Amino acid, along with caffeine, helps in improving memory and learning. The amount of caffeine found in various varieties of tea is given in Table 1.

Mechanism of Action of Caffeine: Caffeine (1, 3, 7-trimethylxanthine), a purine alkaloid, is reported as the most widely used bronchodilator drug in the world. A large population reports regular use of caffeine and caffeine-containing beverages and foods 15. The daily intake of caffeine in the USA and Canada is reported to be 200-250 mg/person per day, while in Nordic countries and Great Britain, it is 300-400 mg/person per day 15, 16. Caffeine is absorbed easily from GIT and distribute in all body fluids. The metabolism of caffeine includes complex series of reactions and a peak plasma concentration within 15-20 min of oral ingestion 17-21. A number of mechanisms are reported to explain the action of caffeine but most accepted is its antagonism at adenosine receptors (A1, A2A, A2B and A3) 22-24 in CNS25-27 and in CVS 28-30 due to its structural similarity with adenosine Fig. 2.

Among subtypes of adenosine A1 and A3 types inhibit adenyl cyclase while A2A and A2B stimulate increasing cAMP production 17.

Thus, A2A receptors existing in various WBC’s, mast cells, smooth muscles 31-32 and platelets, on activation, are associated with the vasodilation of coronary and also peripheral vasodilation 33-34 neo-angiogenesis 35 and also affect the synthesis of cytokines from the cells of the immune system and also from the cells involved in inflammation 36. The studies on humans suggest that excess caffeine consumption may result in an antithrombic effect and prevent aggregation of platelets due to A2A adenosine receptor upregulation 37-39. The platelet associated effect of caffeine depends on how much caffeine is taken for how long the duration of time 38, 39. The exact link between caffeine and its anti-inflammatory effect is misleading. The study on selective agonists can better explain the anti-inflammatory effect, and subsequently, antagonists increasing inflammation and may result in tissue damage 40-42. Further studies report that caffeine is also effective in vitro in suppressing TNF production, a cytokine in human blood 43. The field of interest in this area is to study further the anti-inflammatory effect of caffeine in various humans 43-44.

CONCLUSION: Of all the reported diseases and disorders, asthma is a leading serious disorder affecting a large population of the world. Among reported cases of asthma from all age groups, the highest percentage is of children and adults till 18 years of age. India has approximately 15-20 million asthmatic patients while countries are sounding well medically like USA had made a database of their citizens developing allergy (asthma) from plants. This database includes the pollination time of plants, thus reflecting measures taken by a country towards the health maintenance of its citizens. However, the contribution of synthetic medicines for the treatment of such disorders is associated with harmful side effects. Over the past few decades, the serious realization of problems associated with synthetic medicines has gained attention towards herbs and natural products. These natural therapies are easily available, nut and economical, and free from any side effect. A lot of work is still required on tea to determine its actual potential for human use. Clinical trials are mandatory to collect data of its active constituents, and also there is a need for the development of the best-suited dosage form and effective route of administration. Still, more research is required in this field to study the underlying properties of tea, the mechanism of action of caffeine, and its role in asthma.

ACKNOWLEDGEMENT: Authors would like to thank Chandigarh University for giving facilities for data collection.