ABSTRACT: Infertility is one of the most extremely tragic all over the world. Despite recent advances in the treatment of male infertility, the problem has not been satisfactorily tackled. The male infertility is mainly due to an inadequate number of spermatozoa in the semen, the failure of the spermatozoa to move with sufficient vigor towards their goal. Herbal medicines have been broadly used in developed countries hence they are natural and comparatively safe. They contain plant materials as their pharmacologically active components.  The aim of the study is to evaluate the acute and sub-acute toxicity of the spermatogenic Siddha drug Magizhampattai Chooranam (MPC). For acute studies, different doses of MPC were administered orally to rats once daily for one week. For sub-acute studies, different doses of IC were administered orally to rats once daily for 28 days in various doses at 250, 500, 1000 mg/kg of body weight. Detailed hematological, biochemical, necropsy and Histopathological evaluation of organs were performed for all animals. Histopathological analysis revealed that Spleen, Testes, Pancreas, Lung, Liver, Brain, Heart, Stomach, Intestine, Bone, Ovary, and Kidney tissues of treated groups did not show any signs of toxicity. No impairment in hepatic, renal, hemopoietic functions was observed throughout the study.

INTRODUCTION: Infertility is the failure of a couple to conceive a pregnancy after trying to do so for at least one full year. Approximately 20% of couples struggle with infertility at any given time. Infertility has increased as a problem over the last 30 years 1. Male reproductive health has a social and psychological impact on normal life 2.

Male infertility is commonly due to deficiencies in the semen and semen quality is used as a surrogate measure of male fecundity 3. Male reproductive medicine and surgery remain one of the most actively evolving areas in urology, with a variety of therapeutic modalities under investigation 4.

Conventional treatment for infertility usually involves invasive and, expensive procedures. There are many alternative treatments available that can increase the chance of conception 5. Herbs have been in use since a long time to treat various diseases 6. However, many issues related to a lack of scientific evidence about the efficacy and safety of herbal remedies remains unresolved 7, 8.

Pre-clinical toxicity studies are essential in determine a safe dose for human trial 9. Before the initiation of human clinical trials of novel drugs, the safety of their application is to be proved. Generally, this is accomplished by the implementation of general preclinical toxicity experiments to uncover potential poisonous effects of any drug in animals 10. Worldwide use of complementary and alternative medicines, including herbal products for various health benefits, has recently increased 11, 12.

Preparation of the Magizhampattai Chooranam: Mimoso elangi (Magizham Pattai), The Gum of Butea monosperma (Purasam Pisin), Hygrophila auriculata (Neermulli Seeds). All the drugs were dried well in shadow and made into fine powder. They were put in a bottle and mixed thoroughly.

Aim: The study aims to evaluate the acute and sub-acute toxicity of the Siddha drug ‘Magizham Pattai Chooranam.’

Preparation of Drug Solution: The powdered drug Magizham Pattai Chooranam was weighed in the electronic balance and mixed thoroughly and uniformly with solvent (Adjuvant) 2% Carboxy Methyl Cellulose in water to prepare the suitable stock solution. This was used throughout the study.

Experimental Animals: Adult female Albino mice weighing between 25 to 30 g were used for acute toxicity studies and sub acute toxicity studies both male and female rats weighing between 150- 200gm were used. Animals were housed in a well-ventilated room with 12 h cycle of day and night light conditions and the temperature maintained at around 32 ºC. laboratory diet and tap water ad libitum. All experiments were carried out by the guide for the care and use of laboratory animals.

After one week of habituation, animals were subjected to the experiments. Females were caged separately from the males to prevent matting. All tests were carried out between 9.00 am and 2.00 pm. All efforts were made to minimize animal suffering. The principles of laboratory animal care were followed and the Department’s ethical animals and the study design.

Acute Toxicity Study: Animals mice either sex were fasted overnight and given a single oral dose of Magizham Pattai Chooranam suspended in 2% Carboxy Methyl Cellulose with water (Starting dose 500 mg/kg and up to 5000 mg/kg body wt). The animals were fed with Magizham Pattai Chooranam, and then they were observed for 14 days to record signs of toxicity and death if any.

Sub-Acute Toxicity: Sub-acute toxicity studies were carried out according to OECD TG407 and rats were divided into four groups of 6 animals (3 male and 3 female). The Magizham Pattai Chooranam was administered to the first group of rats was treated with 2 ml/kg volume of vehicle as control group whereas second to the fourth group of animals was treated as test groups administered with the Magizham PattaiChooranam at the three dose levels (250, 500 and 1000 mg/kg was given once daily for 28 days in order to access reversibility and kept for another 14 days post-treatment. The toxic symptoms such as signs of toxicity, mortality water intake, food intake, and body weight changes were monitored daily Table 2, 3, 4.

Rats were anesthetized with ether at the end of the treatment period. All rats were sacrificed after the blood collection after instantaneous washing a part of the liver tissue was kept in frozen containers     (-20 °C) for further analysis of biochemical parameters and another part was used for histopathological studies.

Histopathological Examinations: The internal organs like liver, kidney, heart, lungs, brain, and spleen were isolated and weighed to determine relative organs weights and observed for gross lesions. All tissues were preserved in 10% buffered formaldehyde solution for histological examination. The organ pieces (3-5 µm thick) were fixed in 10% formalin for 24 h and washed in running water for 24 h. Samples were dehydrated in an auto technique on and then cleared in benzene to remove absolute alcohol. Embedding was done by passing the cleared samples through three cups containing molten paraffin at 50 °C and then in a cubical block of paraffin made by was followed the by “L” microtomemoulds and the slides. It was stained with Haematoxylin-eosin.

Statistical Analysis: Statistical analysis was carried out by One-way ANOVA, and the results were expressed as mean ± SEM. The data obtained from the toxicity study was analyzed using students t-test, p values less than 0.05 were considered as significant.

RESULTS AND DISCUSSION: The acute toxicity study, results revealed that the animals treated with 5000 gm/kg dose produced remarkable changes in the general behavior pattern in the animals like slow response to external stimuli, reduction of mobility and aggression and sluggishness, etc. after oral administration of Magizham Pattai Chooranam initiation of adverse symptoms were noted from the groups treated with 5000 mg/kg Table 1.

TABLE 1: DOSE FINDING EXPERIMENT AND ITS BEHAVIORAL SIGNS OF TOXICITY

Hematological and Serum Biochemical Parameters: The hematopoietic system is very sensitive to toxic compounds and serves as an important index of the physiological and pathological status for both animals and humans. Hematological parameters provide vital information regarding the status of bone marrow activity and intravascular effects such as hemolysis and anemia.

Clinical blood chemistry examination was performed to evaluate any toxic effects on the pancreas function (glucose), kidney function (BUN, creatinine) and liver function (total protein, albumin, total and direct bilirubin, SGOT, SGPT, and ALP). In general, if the clinical blood chemistry values differ more or less than one fold from the normal values, abnormality of kidney, liver and pancreas function should be noted.

Determination of plasma protein like albumin can act as a criterion for assessing the synthetic capacity of the liver. The increased level of those enzymes more than one fold would then be highly significant for clinical pathology with abnormalities in physical appearances. The hematological analysis shows no significant change of blood parameters analyzed such as total red blood cell, hematocrit, hemoglobin, total white blood cell, lymphocytes, neutrophils, and platelets in the treatment groups compared to the control group Table 5. The biochemical analysis of creatinine, urea, triglycerides, total cholesterol, total protein, albumin, AST, ALT, and total bilirubin, shows no significant difference in any of the biochemical parameters examined in either of the control or treated groups but ALP was slightly altered, and it is statistically significant (P<0.01) Table 6, 7.

TABLE 5: HEMATOLOGICAL PARAMETERS AFTER 4 WEEKS TREATMENT WITH THE MAGIZHAM PATTAICHOORANAM

All the above said hematological and serum biochemical parameters are within normal limits. After the experimental period, the biochemical results indicate that there was no significant changes in total bilirubin, Total protein, Hb, Globulin, GGT, Chloride, HDL and VLDL. But statistically noticeable changes were observed in the levels of ALP, SGOT, SGPT, Urea, Sodium, Potassium, Total cholesterol, Triglycerides and Glucose Table 8. From the urine routine analysis, the drug treatment indicates changes in the PH of urine, Protein, bilirubin, Ketones, and Urobilinogen Table 9.

Similarly, the vital organs weight variation confirms, and no alterations in biochemical parameters match with the other unchanged architectures in overall parameters. So it can be concluded that the administration of Magizham PattaiChooranam at the dose levels used in this study is advisable and safe. And also can be suggested that the slight dose adjustment is required based on the severity of disease in the treatment as the minor and insignificant toxic symptoms were observed at a higher dose level of Magizham PattaiChooranam treatment in rodents.

Macroscopic and Microscopic Study: The histological examination of the various organs was performed in both control and treated groups. Histopathological analysis has shown all tissues apart from the liver of the treated groups to be morphologically similar to that of the negative control groups. Liver-The normal liver showed polygonal hepatocytes with a rounded nucleus, arranged in cords with the portal tract exhibiting a normal structure. In the treated groups, rats of groups II and III also exhibit normal morphological features while that of Group IV showed mild focal portal inflammation with lymphocytes, the structure of hepatocytes being normal and intact with no necrosis. Organ weight revealed that at repeated dose administration of Magizham Pattai Chooranam at a dose of 1000 mg/kg did not produce any organ swelling, atrophy and hypertrophy Table 10. Lungs- Sections of lung tissue of control and treated groups showed normal alveoli. Kidney-The kidney of the control group consists of normal cortex and medulla.

The glomeruli and renal tubules namely the proximal and distal convoluted tubules exhibit a normal structure. The treated groups also exhibited a normal architecture indicating the absence of renal toxicity. Heart –The histological features of control and Groups II, III and IV showed a normal myocardium at 100 x magnification. Spleen –The spleen of the control rats showed the white pulp containing lymphocytes surrounded by a red pulp. The spleen of Magizham Pattai Chooranam treated groups also exhibited the same structural features. Brain- Brain appears to be normal in the negative control group. Cerebrum and cerebellum are normal. The cerebellum and cerebrum also had similar structural features.

TABLE 10: EFFECT OF ORAL ADMINISTRATION OF A MAGIZHAM PATTAICHOORANAM ON ORGAN WEIGHT 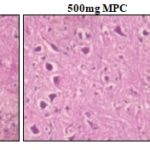 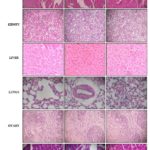 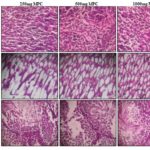 CONCLUSION: Since there were no significant adverse effects on the hematological and biochemical parameters, it may be concluded that the Magizham Pattai Chooranam did not induce any noteworthy damage to the vital organs. In conclusion, the present investigation demonstrates that the doses consumed in traditional medicine, i.e. Magizham Pattai Chooranam may be considered as relatively safe, as it does not cause either mortality or produce severe toxicological effects on selected body organs, biochemical inside and hematological markers of rats during the acute and sub-acute periods of study.