ABSTRACT: Herbals are playing a major role in Siddha system of medicine. Herbals contain plant materials as their pharmacologically active components. The aim of the study is to evaluate the acute and sub-acute toxicity of the Siddha herbal preparation Lagu Seena Chooranam (LSC) for the treatment of Scabies in the pediatric age group. For acute studies, different doses of LSC were administered orally to rats once daily for one week. For sub-acute studies, different doses were administered orally to rats once daily for 28 days in various doses at 200, 400 mg/kg of body weight. Detailed hematological, biochemical, necropsy and histopathological evaluation of organs were performed for all animals. Histopathological analysis revealed that spleen, testes, pancreas, lung, liver, brain, heart, stomach, intestine, bone, ovary, and kidney tissues of treated groups did not show any signs of toxicity. No destruction in hepatic, renal, hemopoietic functions was observed throughout the study.

INTRODUCTION: Plants are using for the medicinal purpose since from the ancient days. These medicinal plants are described as herbals. Herbals contain plant materials as their pharmacologically active components.  These are playing a significant role in Siddha system of medicine. Siddha system is one of the popular traditional medicinal systems in India. Traditional medicinal resources, especially plants have been found to play a major part in managing skin disorders 1. Plants are the only economic source of some well-established and important drugs. Also, they are also the source of chemical intermediates needs for the production of some drugs 2. However, many issues related to a lack of scientific evidence about the efficacy and safety of herbal remedies remains unresolved 3, 4.

Pre-clinical toxicity studies are essential to determine a safe dose for human trial 5. Before the initiation of human clinical trials of novel drugs, the safety of their application is to be proved. Generally, this is accomplished by the implementation of extensive preclinical toxicity experiments to uncover potential poisonous effects of any drug in animals 6.

Environmental Conditions: Air-conditioned rooms, the temperature was between 22 ± 2° C and the illumination cycle set to12 hours light and 12 hours dark.

Procedure: An acute toxicity study was carried out as per OECD guideline (Organization for Economic Co-operation and Development) 423. Healthy female rats weighing 220–240 gm were used for this study. Studied carried out at female rats divided into two groups of 3 animals each under fasting condition (16 h before test animals deprived of food, not for water), signs of toxicity were observed for every one hour for first 24 h and every day for about 14 days from the beginning of the study. All animals were observed daily for clinical signs. The time of onset, intensity, and duration of these symptoms, if any, were recorded.

Observation: Animals were observed for possible signs of toxicity related to CNS, ANS, and CVS.

Procedure: A sub-acute toxicity study was carried out as per OECD guideline (Organization for Economic Co-operation and Development, Guideline-407. Animals were allowed an acclimatization period of 7 days to laboratory conditions before the initiation of treatment. Three rats of same-sex were housed per cage. Eighteen rats (09 male and 09 healthy female animals) were randomly divided into three groups of 6 animals.

Treatment groups were dose daily for 28 days. Control group animal left untreated; Animal belongs to group II treated with low dose of the test drug 200 mg/kg and Group III treated with high dose of the test drug 400 mg/kg, per oral by gastric intubation technique. All animals were observed daily for clinical signs of toxicity. The time of onset, intensity, and duration of the symptoms, if any, were recorded. Body weight, food intake, water intake and other general behavior of the animals will be monitored and recorded once in a week for the entire duration of the study.

Hematological and Biochemical Investigations: 11 Blood was collected through retro-orbital sinus from all the animals of different groups on the 29th day. The blood was collected in tubes containing Heparin/EDTA as an anticoagulant. Animals have fasted overnight before the blood collection. Hematological and biochemical parameters were determined using Auto analyzer using standard kits, and the data are provided.

Necropsy: All animals were sacrificed by cervical dislocation on the 29th day. Necropsy of all animals were carried out, and the weights of the vital organs were recorded (heart, liver, kidneys, and brain).

Acute Toxicity Study: Acute toxicity effect of the test drug was estimated by close observation of animals for about 24 h after single dose administration of the test drug, and it was observed that there are no significant signs of CNS related toxicity like convulsion, locomotion, muscle strength and ANS related toxicity like salivation, lacrimation, etc. was observed in the treatment group.

At the end of the study period, all animals were sacrificed, and the organs were isolated and observed for change in structural morphology. There is no significant change in the organ necropsy of the animals treated with the test drug. It shows that the test drug hasn’t produced any internal hemorrhage or organ related toxicity.

Sub - Acute Toxicity Study: Sub-acute toxicity for the given test drug was carried out as per the OECD guideline 407 by repeated dose administration of the test drug in animals, and further animals were closely monitored for the emergence of toxicity. Since, there were no significant adverse effects on the hematological, biochemical and histopathological parameters it may be concluded that the test drug at both the dose level of 200 mg/kg and 400 mg/kg may be considered as relatively safe, as it did not cause either mortality or produce severe toxicological effects on selected body organs, biochemical indices and hematological and histopathological markers of rats during the sub-acute periods of study Fig. 1.

TABLE 5: EFFECT OF TEST DRUG ON HEMATOLOGICAL AND BIOCHEMICAL ANALYSIS 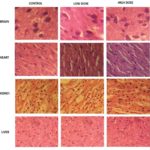 CONCLUSION: The present exploration demonstrates that the doses consumed in the traditional medicine, i.e., LSC may be considered as relatively safe, as it does not cause either mortality or produce severe toxicological effects on selected body organs, biochemical incite and hematological markers of rats during the acute and sub-acute periods of study.