ABSTRACT: An ethnomedicinal survey was carried out during August 2008 to October 2008 among tribal medicinal practitioners of the Murong tribes. Various Murong tribal practitioners practiced in their localities for treating different kinds of disease of Ramgarh Upazila, Khagrachari districts of Chittagong Hill Tracts Region in Bangladesh. We observed to use 40 plants species belonging to 29 families in the various treatment of disease. This diversity only adds to the uniqueness of the traditional medicinal practices and opens up scientific possibilities of discovering different drugs from different medicinal plants to treat any given ailment. These tribal medicinal plants were mostly used for the treatment of constipation, cough, fever, diarrhoea, dysentery, diuretic, diabetes, eczema, itches, jaundice, skin disease, vomiting, wound, joint pain and worm. The plants were collected and identified botanically along with their scientific name, local name, family name, habit, parts used and medicinal uses. This detailed information will be helpful for the pharmacognosist, botanist and pharmacologist for the collection and identification of the plant for their research work.

INTRODUCTION: Over the past decade, there has been a dramatic increase in the demand for medicinal plants for use in traditional medicine and contemporary and alternative medicine in both developing and developed countries 1; thus, a large number of people habitually use such medication because herbal treatment is, in some cases, considered relatively cheap 2. However, its popularity also stems from the efficacy of the treatment in most cases and relative safety, with few or no side effects. Herbal medicines, because of their decentralized nature, are generally easily and quickly available 3.

Now, both developed and developing countries are involved in plant-based herbal medicine system, as modern pharmaceuticals are not accessible for all 4. The Chittagong Hill Tracts region is a hilly forested region in the South-eastern part of Bangladesh. Besides being a hotspot within Bangladesh regarding the diversity of various floral species (including medicinal plants), the area is also inhabited by a large number of tribes as well as mainstream Bengali-speaking people.

The various tribes have their traditional medicinal practitioners (TMPs), while folk medicinal practitioners, otherwise known as Kavirajes, cater to the medical needs of the non-tribal mainstream population. This diversity of floral species and traditional medicinal practices have made Khagrachari districts (which fall within the Chittagong Hill Tracts region) interesting spots for conducting ethnomedicinal studies. Thus, scientists are presented with a wide variety of plants with each plant having their unique phytochemical constituents, and which constituents, following further scientific trials, open up the possibilities of discovery of a wide variety of drugs, each drug being efficacious in treatment of either the full disease or efficacious in the treatment of any particular symptom of the disease.

Study Area: Ramgarh is an Upazila of Khagrachari District in the Division of Chittagong, Bangladesh. Ramgarh is located at 22.9667°N 91.7000°E. Ramgarh Upazila with an area of 207.69 sq km, is bounded by Indian State of Tripura and Matiranga upazila on the north, Manikchhari and Lakshmichhari upazilas on the south, Mahalchhari upazila on the East and Fatikchhari upazila on the West. Forests, hills, and tiles cover a substantial portion out of the upazila. Ramgarh (Town) consists of two mouzas. It has an area of 64.75 sq km. The town has a population of 23856; male 53.42% and female 46.58%; population density per sq km 368. Literacy rate among the town people is 36%. The town has three dak bungalow. Ramgarh thana was established in 1905 and was turned into an upazila in 1983. The upazila consists of 3 union parishads/wards, 11 mouzas / mahallas, and 82 villages. It has 9304 units of house hold and total area 240.87 km².

Study Method: The survey was conducted the Murong tribes who reside in the districts Khagrachari districts in the Chittagong Hill Tracts region, which falls in the South-eastern part of Bangladesh. Informed consent was obtained from the TMPs of the tribe before the commencement of the survey. The TMPs were informed in detail as to the nature and the purpose of the survey and consent obtained as to the dissemination of survey results in national or international publications. Interviews were conducted with the help of a semi-structured questionnaire and the guided field-walk method as described by Martin (1995) and Maundu (1995).

In this method, the TMPs took the interviewers to spots from where they collected their medicinal plants and pointed out the plants, along with providing their local names and a description of their uses. All information was given by Kalanka Kabiraj, who usually was the healer of the tribe and was fluent in both the tribal language as well as Bangla. Plant specimens were collected and dried in the field, and later brought back to Bangladesh National Herbarium at Dhaka for complete identification.

RESULTS AND DISCUSSION: A total of 40 ethnomedicinal plant species including herb, shrub, tree, and vine distributed across 29 families were documented in the study to be used by the tribal community for curing different ailments Table 1. 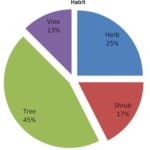 FIG 1: PERCENTAGE OF USING MEDICINAL PLANTS OF DIFFERENT HABITS BY THE HEALER

Various researchers across the country, for example, Combretaceae, Liliaceae, and Rutaceae 5, Fabaceae 6, 7, Euphorbiaceae and Lamiaceae 8, Solanaceae, and Sterculiaceae 9, Fabaceae and Solanaceae 10 also recorded that the species under these families were frequently used as medicinal plants in tribal area Bangladesh. Among the recorded plants, trees were the most frequently used in by the healer to treat different ailment which is about 45% Fig. 1, followed by herbs 25%, shrubs 17.5%, and vine 12.5% Table 2.

TABLE 2: USING MEDICINAL PLANTS OF DIFFERENT HABITS BY THE HEALER

A similar trend was also observed that trees were the most used growth form of medicinal plants in Bangladesh 11, 5, 12–17, but with a few exceptions 18, 19  where they found that herbs were mainly used as medicinal plants.

Medicinal plants are generally used to treat diarrhea, dysentery & abdominal pain where four species of each ailment were used Table 3. Cold ailments, cough, and fever are treated with three species; diabetes, malaria, and boils, are treated with two species each. In some cases, a mixture of several species is also used for treating one disease. In most cases, the juice from leaves, root, rhizome, and bark is used as medicine, while fruits are eaten raw. Moreover different parts of medicinal plants are used to treat different ailments Table 4.

Leaves (45%) are the most common part by which local tribal healers treat the ailments Fig. 2. Followed by bark (17%), fruit (12%), root (12%), seed (8%) and stem (6%). The above discussion suggests that the ethnomedicinal wisdom of the Murong healers seems to be in line with other studies elsewhere. In this, most of the plants used by the healers have been validated in their respective uses through scientific studies on bio-active chemicals and pharmacological activity. 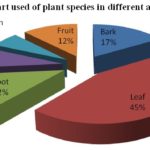 CONCLUSION: The importance of any ethnomedicinal survey lies in the potential discovery of plants, which may through proper scientific investigations yield novel compounds to treat both old and emerging diseases. From that point of view, the plants obtained from the Murong tribe in Ramgarh, Khagrachari district are important, more so, because the indigenous uses of some plants for specific ailments have been validated by scientific studies.

Other plants, for which uses have not been validated, need to be studied quickly for the forest region inhabited by the Murong is dwindling fast with consequence loss or endangerment of plant species. Also, the traditional medicinal knowledge of the Murong is being lost with every passing day, as the Murong lose their ethnic customs and become more assimilated into the general population.

ACKNOWLEDGEMENT: The author is grateful to Professor Dr. Mohammed Rahmatullah, Dean Faculty of Life Science and Pro-Vice Chancellor of the University of Development Alternative for providing necessary facilities and guideline to carry out this work.