A REVIEW OF BIOPESTICIDE AND THEIR MODE OF ACTION

A REVIEW OF BIOPESTICIDE AND THEIR MODE OF ACTION

ABSTRACT: Biopesticides, including entomopathogenic viruses, bacteria, fungi, nematoid’s, and secondary plant metabolites, are gaining increasing importance as they are alternatives to chemical pesticides and are a major component of many pest control programs. The virulence of various biopesticides such as nuclear polyhedrosis virus (NPV), bacteria, and plant products was tested under laboratory conditions very successfully, and the selected ones were also evaluated under field conditions with major success.

INTRODUCTION: Biopesticides are developed from naturally occur- ring living organisms such as animals, plants, and microorganisms e.g., bacteria, fungi, and viruses 2. The concept of an ideal pesticide has evolved greatly during the second half of the 20th century. In the early 20th century, pesticides were used with a low level of control and without harmonized criteria because compounds efficacy was prevailing 1. The utilization of biopesticide programs would be required to prevent the development of resistance in target insect pests to synthetic chemical pesticides and toxins from biopesticides 2. Natural products and living organisms have a long history as crop protection agents. Pesticides are usually referred to as “biopesticides” when they are formulated using these kind of substances.

Microbial Pesticide: The consist of micro-organism such as a bacterium, virus, fungus, protozoa, nematodes as active ingredients which are used for the biological control of plant patho-gen, pestiferous insect and weed in agro- ecosystems. The most widely used microorganism in the development of biopesticide is the insect pathogenic bacterium bacillus thuringiensis. The bacter Jim serves as an insecticide for most lepidoptera, coleopteran, and diptera.

Biochemical Pesticide:  They are also known as an herbal pesticide. These are naturally occurring substances used for controlling pests through a non-toxic mechanism. Biochemical pesticides fall into different biological function classes, including pheromones and other semiochemical plant extract, and natural insect growth regulators.

Antibiosis: The production of biochemicals by one microorganism that inhibits the growth of other organisms is known as antibiosis. Antibiotics generated by BCAs serve in different ways in order to minimize pests and pathogens. Production of multiple antibiotics probably helps suppress diverse microbial competitors, some of which are likely to be plant pathogens. More recently, Pseudomonas putida WCS358r strain was genetically engineered to produce phenazine and 2; 4-diacetyl-phloroglucinol (DAPG) had greater capacity to control plant diseases in field-grown wheat 4.

Competition: Soils and plant surfaces constitute a nutrient-limited environment, thereby putting pressure on a microbe to compete for the available nutrients. Both BCAs and the pests compete with each other for nutrients and space to establish in the environment. This process involves an indirect interaction between BCAs and pathogens, eventually resulting in pathogen exclusion by means of diminishing food base and physical occupation of site 4.

Hyperparatism: Fungi that are parasitic on other fungi are usually referred to as mycoparasites. Parasitism requires the host fungus to be recognized by the mycoparasite followed by the production of hydrolytic enzymes and antibiotics. Direct parasitism or lysis of the mycelium of a fungal pathogen by mycoparasitic fungus is known as hyperparasitism observed. Trichoderma lignorum parasitizing the hyphae of Rhizoctonia solani. The mycoparasitism of Trichoderma species enabled by appressoria-like structures to penetrate the target fungus cell wall to contributes towards the development of biological control strategies 4.

Synergism: The ability of some bioagent to combine the action of the hydrolytic enzyme and secondary antibiotic metabolites. For example, the effectiveness of T. App. as a biocontrol agent and its fitness in the environment is as a result of the synergistic effect of antimicrobial compounds. Examples include pyrones, coumarins, etc. 4 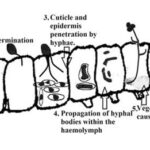 FIG. 1: MODE OF ACTION OF ENTOMOPATHOGENIC FUNGI AGAINST LEPIDOPTERAN INSECTS

M. anisopliae Sorokin var. anisopliae is an essential entomopathogenic fungus. It propagates worldwide in the soil, demonstrating a wide range of insect host species. This subspecies was first described in 1879 by Metchnikoff, under the term Entomophthora anisopliae, as a pathogen of the wheat cockchafer, and later it was termed M. anisopliae by Sorokin in 1883. 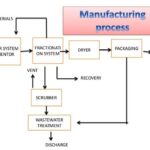 Dust: Dust are formulated by sorption of an active ingredient on finely ground, solid mineral powder (talc, clay, etc.) with particle size ranging from 50-100 µm. Dust can be applied directly to the target, either mechanically or manually.

Inert ingredients for this formulation are anticaking agents, ultraviolet protectants, and adhesive materials to enhance adsorption. The concentration of active ingredient (organism) in the dust is usually 10%. Although they have positive effects under certain circumstances, they also pose serious inhalation hazard for users. This is an old formulation type that had been used for many years before granules were developed and they became restricted on account of their adverse health impact on users.

This type of formulation is applied to seeds by tumbling seeds with the product designed to adhere to them. Powders for seed treatment are a very old type of formulation, a traditional product form for coating seeds, and they also contain a red pigment as a safety marker for dressed seed 5.

Capsule Suspension: (CS) is a stable suspension of the micro-encapsulated active ingredient in a continuous aqueous phase, intended for dilution with water before use. Bio-agent as its active ingredient is encapsulated in capsules (coating) made of gelatin, starch, cellulose, and other polymers. In that way, the bio-agent is protected from extreme environmental conditions (UV radiation, rain, temperature, etc.), and its residual stability is enhanced due to slow (controlled) release.

Emulsion: Emulsions consist of liquid droplets dispersed in and other immiscible liquid (dispersed phase droplet size ranges from 0.1 to 10 µm). The emulsion can be oil in water (EW), which is a normal emulsion, or water in oil (EO), an invert emulsion. Both products are designed to be mixed with water before use. To avoid instability, the proper choice of emulsifiers for stabilization is extremely important.

In the case of invert emulsions, losses due to evaporation and spray drift are minimal because oil is the external phase of the formulation.

Oil Dispersions: (OD) are dispersions of solid active ingredients in non-aqueous liquid intended for dilution before use. The non-aqueous liquid is most often oil; the best choice is some kind of plant oil. In that way, retention, spreading, and penetration can be improved.

Ultra-Low Volume Liquids: (UL) are formulations with a very high concentration of an active ingredient, which is extremely soluble in crop-compatible liquid (ultra-low volume liquid). UL products are not intended for dilution with water before use and often contain surface-active agents and drift control additives.

CONCLUSION: The utilization of natural products with commercial value is directly manifested by the numerous compounds present in the market and have remained there in many cases after many years.