ABSTRACT: Dregea volubilis (L.f.) Benth. Ex Hook. f. is a large twinning shrub belonging to the family Asclepiadaceae. The leaf is amphistomatic with tetracytic, anomocytic, paracytic stomata. The sides of the leaf in the surface are straight to curved, surface striated on either side. The mesophyll is interspersed with sphaerocrystalliferous idioblasts. Midvein consists of a single arcuate vascular bundle, bicollateral, conjoint, endarch. In T. S. petiole is oval, adaxially grooved at center and with two lateral adaxial ridges, consisting of a large arc shaped vascular bundle at the centre with a 2 small spherical vascular bundles in adaxial ridges.

MATERIALS AND METHODS: Dregea volubilis plant material was collected from various locations of Warangal district, Telangana, India. The collected material was taxonomically identified and deposited in Herbarium Hyderabad tense, Department of Botany, Osmania University, Hyderabad. The leaves are boiled, fixed in F. A. A. (Formaldehyde -Acetic acid- Alcohol), dehydrated through xylene - alcohol series embedded in paraffin wax. The sections were cut at 10-12 μm on Optica 1090A rotary microtome, stained with crystal violet and basic fuchsin combination and mounted in Canada balsam 2. Epidermal peels were obtained by gently scraping and peeling by razor blade, were stained with saffranine and mounted in glycerine. The powder microscopy characters were studied by boiling the drug in distilled water, stained in saffranine and mounted with glycerine. The photomicrography was done on Olympus BX-53 trinocular microscope attached with a digital Sony camera. 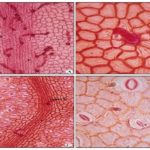 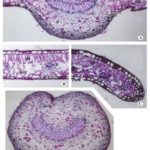 Powder Microscopy: Powder consists of pieces of the abaxial epidermis with straight to curved sides and tetracytic and anomocytic stomata; pieces of coastal cells with polygonal to linear cells in parallel rows, dense with crystals of calcium oxalates, many; uniseriate cylindrical hair long, either whole or broken. 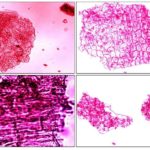 DISCUSSION AND CONCLUSION: The anticlinal walls of epidermal cells are reported straight on the adaxial while straight to slightly wavy towards abaxial 3, while presently the sides are thick, straight to curved on either surface. The surface of the epidermal cells has been reported as striated 4 which is also confirmed presently. Further, the epidermal cells are found dense with contents also with calcium oxalate crystals in few. The sides are thick and straight to curved, and the surface is striated.  The foliar stomata are reported as hypostomatic 3, 5, 6, 7. Presently, in contrast, the stomata are found to occur on either surface, though few occur near the base, sides of midvein and apex of a leaf on the adaxial surface while dispersed all over the surface except on veins towards abaxial. Further, the stomata are reported paracytic and tetracytic 3; mixed anomocytic and paracytic 4, 6; rubiaceous 7.

Presently they are mostly tetracytic, few anomocytic rarely paracytic with subsidiaries 2-5 in number, indistinct, mostly f-type on either side. Trichomes have been reported as absent 3, while with non glandular uniseriate hairs 4; unicellular and uniseriate hairs 5; uniseriate multicellular and glandular trichomes 6; uniseriate and multicellular hairs 7. But presently they are uniseriate macro form cylindrical hair on either side, distributed commonly all over more on veins in the species studied. The lamina is described as dorsiventral 3, 5, 6, 7 which is presently confirmed. Further, the midrib in T.S. has been reported as ridged adaxially 3. Presently the leaf is faintly ridged adaxially and conspicuously ribbed abaxially at midvein.

The epidermis is reported as 1- layered earlier 3, 5, 6 and is presently confirmed. The shape of the epidermal cells of either side of lamina has been described as cubical to rectangular while those over the midvein as oval to oblong 5, 6. While presently, they are barrel-shaped, oval to circular and tabular over lamina wings on either side but smaller towards on abaxial. Mesophyll has been reported as 1- layered palisade tissue on the upper side and few rows of spongy cells on lower side 3; palisade as row of stalks and 3-5 layered spongy parenchyma 4; palisade as compact, 2-layered followed by spongy parenchyma with oval to oblong, thin-walled, compactly arranged cells 5; 1-2 layered palisade parenchyma followed by rest of spongy parenchyma 6. Presently the palisade is observed as 1-layered, interrupted at midvein and secondary veins. The mesophyll has been reported to possess oil cells and calcium oxalate crystals 3; prismatic rosettes and cluster crystals 6. It is also confirmed in the present study as sphaero-crystalliferous idioblasts are found interspersed in palisade and spongy tissues.

The vascular tissue is reported to possess a crescent-shaped bundle at the center of the midrib 3, 4, 7. Central endarch, bicollateral vascular bundle 5, 6; presently the vascular tissue at midvein is a single arcuate bundle, bicollateral, conjoint, endarch; the xylem consisting of 30-35 tracheary elements in number, arranged in radial rows in contrast to the earlier report of 2-6 vessels arranged parallel to each other 5. In T.S. petiole is grooved adaxially 3; gradual development of a groove on ventral side 4; circular in shape 5. Presently petiole is oval shaped, adaxially grooved at the centre with lateral ridges. The epidermis has been reported as single layered, covered by a thick cuticle 3; single layered epidermis 4; covered by thin cuticle 5. Presently epidermis is 1-layered, covered with thick cuticle also confirms the earlier observations 3, 4. Further, epidermal cells are mostly oval to circular, few barrel shaped, contents dense with tanniniferous idiobalsts in few. Hypodermis is collenchymatous 3; below the epidermis colleen-chyma is 3-4 layered with circular to oval cells, angularly thickened cells 5; cortex composed with collenchyma and parenchyma 4. Presently ground tissue is heterogenous and consists of collenchyma and parenchyma tissues as reported earlier 3, 4, 5.

The cortex consists of thin-walled, circular to oval parenchymatous cells with having distinct intercellular spaces, some of these cells contain chloroplasts 5; ground tissue is parenchymatous, surrounding the vascular bundle 3. Present studies while confirming earlier observations 3, 4, 5 shows that parenchyma is 20-23 layered adaxially and 14-17 layered on abaxial. Cells polygonal, oval to circular, walls thin with small intercellular spaces as observed earlier 5; the calcium oxalate crystals are present in the ground tissue 3; rosette and cluster crystals were in ground tissue 6 is confirmed in the present studies. Vascular tissue is reported as a crescent-shaped, bicollateral, endarch bundle at the centre of the petiole 3; centric vascular strand 5; large crescent shape bundle at the centre while 2 smaller circular bundles close to the adaxial ridges 4. Presently, vascular tissue consists of a large arc-shaped vascular bundle at centre with a 2 small spherical vascular bundles in adaxial ridges which is conjoint, bicollateral, apericyclic and confirms with earlier observations 3, 4, 5. Xylem consists of numerous tracheary elements arranged in radial rows. A 2-3 layered cambium is present.