ABSTRACT: Teucrium polium L. is a member of the Lamiaceae family and is represented in the Flora of Syria by two variety: Teucrium polium var. angusti folium and Teucrium polium var. mollissimum. Teucrium polium is a wild-growing flowering plant, found abundantly in Syria, and it is used traditional medicine for it's diuretic, antipyretic, antispasmodic, tonic, anti-inflammatory, antihypertensive, anorexic, analgesic, antibacterial and antidiabetic effects. Several reports have demonstrated a wide range of beneficial biological and pharmacological activities of the phenylethanoid, phenylpropanoid, and flavonoid components, while the furano neo-clerodane diterpenoids present in germander have been implicated in the in-vivo hepatotoxicity of this botanical. Phytochemical studies of this plant have been carried out. Aerial parts of the plant were extracted with petroleum ether at room temperature, and then extract with methanol in Soxhlet, and finally extract with aqueous methanol at room temperature successively. Fractionation of the methanol extract by column chromatography and purification by crystallization yielded three known flavonoids Cirsimartin 2, Cirsiliol 3, and Apigenin 4. The aqueous methanolic extract yielded one new neo-clerodane type diterpenoid, Syrapolin I 1 (3,12- diacetoxy - 4α,18α ; 15,16- diepoxy - 6 – oxo – neo – cleroda - 13 (16), 14- diene -7α, 20β- dihydroxy-19- hemiacetal). The structure of compounds was proposed based on spectroscopic methods IR, MS, and 1-D (1H, 13C, and DEPT) and 2-D (COSY, HETCOR, HMBC) NMR experiment, and comparison with closely related compounds.

INTRODUCTION: Teucrium polium (Family Lamiaceae) is one of the popular fragrant plants in Syria and is distributed throughout the country. In the Flora of Syria, this genus is represented by 21 species such as T. creticum grow in Safita and Mussiaf, T. oliverianum grows in Deir-ez-Zor, T. chamaedrys grow in Lattakia and Banias, and T. polium grow in Al-Hassaka. Teucrium polium is a perennial shrub, 20-50 cm high, distributed widely in the dry and stony hills and deserts of almost all Mediterranean countries, South-western Asia, Europe, and North Africa 1.

The bruised foliage releases a pleasant aromatic odor and the flowers are small, in clusters and range from pink to white. In the folk medicinal traditions, this plant is used for its antibacterial, anti-spasmodical, anti-rheumatic, anti-diabetic and antipyretic activities. In an admixture with other powdered herbs, it is claimed to be therapeutic for peptic ulcer.

The biological activity of T. polium is widely reported, and it has been shown to possess anti-inflammatory 2, anti-nociceptive 3, 4 activities. The aqueous extract of Teucrium polium aerial parts, given intraperitoneally at dosages from 50 to 150 mg/kg for 10 days, reduced significantly the serum levels of cholesterol and triglycerides in hyperlipidemic rats 5. Recently, the high insulinotropic and anti-hyperglycemic activity of its crude extract using both animal and isolated rat pancreatic islets has been evaluated 6-8.

Antibacterial activity against some Gram-positive and Gram-negative bacteria as well as antifungal activity against Yarrovia lipolitica and Saccharomyces cerevisiae has also been reported 9, 10. Recently, cytotoxic, anticancer, and antimutagenic effects of ethanol and aqueous extracts of T. polium have been shown on various cell lines 11-13. T. polium extract contains selenium 14 and has shown antioxidant activity like α-tocopherol. In particular, their antioxidant activities were evaluated through the use of several commonly accepted in vitro assays, which included DPPH scavenging (DPPH), reducing power (RP), xanthine oxidase inhibitor effect (XOI) and antioxidant activity in a linoleic acid system (ALP) 15-21.

The few adverse effects of T. polium have been reported which indicate the relatively safe nature of this medicinal herb 22-27. The composition of the essential oil of T. polium has been the subject of several investigations 28-36. The naturally occurring neo-clerodane diterpenoids have attracted interest because of their biological activity as insect antifeedant and as antifungal, anti-tumor, and antimicrobial agents. Although a large number of these compounds have been isolated from many plants in the last few years, the genus Teucrium is one of the richest sources of neo-clerodane diterpenes: more than 230 diterpenes have been described. Phytochemical investigations of T. polium have been shown that it contains a lot of diterpenes belong to neo-clerodane type 37-45.

T. polium also rich in constituents such as flavonoids, iridoids and Phenylpropanoid glycosides with undoubted antioxidant properties 18, 46-50. Our previous work on the aerial parts of T. polium L. var. mollissimum Hand-Mazz. led to the isolation of one new neo-clerodane diterpenes Syrapolin II, and two known compounds 6'-O-caffeoyl-8-O-acetylharpagide, clerosterol-3-O-glucoside 51. In continuation of our studies on neo-clerodane diterpenoids from the Teucrium species, we have investigated T. podium, a small shrub which grows widely in Syria. From the methanolic extract and aqueous methanolic extract of the aerial parts of this plant we have isolated the new neo-clerodane diterpenoids Syraoiln I 1, beside to three new known flavonoids, Cirsimartin 2, Cirsiliol 3, and Apigenin 4.

Chemicals: Silica gel 60 F254 plates (Merck) were used for analytical and preparative TLC. Silica gel S (Merck; Mesh 230-400) was used for column chromatography (CC), and all the chemicals were purchased from Merck. 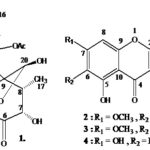 The data from the 13C-NMR spectrum Table 1 display 24 signals. The multiplicities of carbon signals were determined by the DEPT experiment. Taking into account the results from our comprehensive 1D and 2D-NMR studies and previous knowledge derived from metabolites isolated from the genus Teucrium 39, 51-53. It is evident that (1) possesses a highly oxidized neo-clerodane nucleus. The 1H-NMR spectrum (Table 1) of compound (1) showed add at δ 6.56 (J = 0.8, 1.6 Hz, H-14), a broad singlet at δ 7.71 (H-15), and a triplet at δ 7.63 (J = 1.7 Hz, H-16) were readily assigned to a terminal furan ring.

Compound (2) was obtained as a yellow granular powder and exhibiting a positive ferric chloride test and magnesium hydrochloric acid test. Compound (2) gave a molecular ion peak in its EI-mass spectrum at m/z; M = 314 (100%), and M+1 (11%) in agreement with the molecular formula C17H14O6. IR spectrum of (2) showed absorption band for hydroxyl groups 3300 cm-1, α, β-unsaturated carbonyl carbon 1640 cm-1, and aromatic double bond 1595 cm-1 functionalities. The UV spectrum of (2) exhibited absorption maxima at 331 (Band I) and 275 nm (Band II) (in MeOH), bathochromic shifts of 67, 3 and 4 nm with NaOMe, NaOAc and AlCl3 in Band I, respectively. These data revealed that (2) has a flavonoid type structure.