ABSTRACT: The aim of this study was to identify the phytochemical groups of hydroethanolic leaf extract of Senna sieberiana DC and its fractions and to investigate their free radical scavenging activity. S. sieberiana leaves were extracted with a hydroethanolic solvent. From the hydroethanolic extract 3 fractions were obtained after a liquid/liquid fractionation (dichloromethane, ethyl acetate, and water). Phytochemical screening of the leaf extract and its fractions was done using standard reactions. Free radical scavenging activity was assessed using DPPH and ABTS assays. Tannins, flavonoids, anthracene derivatives, sterols, and triterpenoids were the main phytochemical constituents of the leaf extract and fractions. The hydro-ethanolic leaf extract of Senna sieberiana, its dichloromethane, ethyl acetate, and aqueous fractions and ascorbic acid had respective IC50 values of 191.6 ± 3.82; 495.73 ± 8.96; 165.8 ± 4.85; 50.40 ± 2.65; 19.53 ± 0.13 µg/ml in ABTS assay. In DPPH assay, the IC50 values were 44.8 ± 1.22; 218.93 ± 9.01; 32.13 ± 1.8; 26. 4 ± 0.11; 4.66 ± 0.07 µg/ml respectively for the leaf extract, dichloromethane, ethyl acetate, and aqueous fractions and ascorbic acid. The hydroethanolic leaf extract of S. sieberiana had shown free radical scavenging activity. The aqueous fraction was more active among plant tested samples.

Leaf extract of Senna sieberiana has been reported for their antimicrobial 2, antitrypanosomal 3, antiviral 4 and anthelmintic 5 properties. Oxidative stress due to overproduction of free radicals has been involved in neurodegenerative disease (Alzheimer's and Parkinson's diseases), diabetes, cardiovascular disease, atherosclerosis, rheumatoid arthritis 6, 7. What makes us assess the phytochemical composition and the free radical scavenging activity of hydroethanolic leaf extract of S. sieberiana and its fractions.

Extraction and Fractionation: An amount of 125 g of powdered leaves of S. sieberiana was decocted twice for 30 min using one liter of ethanol/water (80:20, v/v) and filtered through Whatman no. 1 filter paper. The solvent was removed under reduced pressure using a rotary evaporator in order to get the hydroethanolic leaf extract. For liquid/liquid fractionation, 2.5 g of dried leaf extract was dissolved in a mixture (distilled water/ dichloromethane; 1:1). After decantation in a separatory funnel, the aqueous solution obtained was extracted again twice with dichloromethane. The dichloromethane solutions were combined and evaporated to give the dichloromethane fraction. The aqueous solution was again subjected to liquid-liquid extraction with ethyl acetate under the same conditions as above. The ethyl acetate and aqueous solutions obtained were evaporated separately and lead to the corresponding fractions.

ABTS Assay: Reduction of free radical ABTS (2, 2-azinobis-3ethylbenzothiazoline-6-sulfonic acid) was investigated using the described method 9. Two stock solutions of 7.4 mm ABTS and 2.6 mm potassium persulfate were prepared and mixed in equal volumes before allowing them to react for 12 h at room temperature in darkness. This mixture was diluted by adding ethanol, to obtain an absorbance of 0.7 at 734 nm. Samples (2 ml) were mixed with 2 ml of ABTS solution, and the mixture was left at room temperature for 2 h in darkness. The absorbance of each sample was measured at 734 nm after 30 min using a spectrophotometer. Experiments were done in triplicate and the ABTS free radical scavenging effect was expressed as IC50 (concentration of sample required to scavenge 50% of free radicals).

DPPH Assay: The determination of the DPPH free radical scavenging activity of samples was done using the described method 10. An ethanol solution of DPPH was prepared by dissolving 4 mg in 100 ml of ethanol. An aliquot of each sample (0.8 ml) at appropriate concentration was added to 3 ml of ethanol solution of DPPH.  The hydroethanolic leaf extract of Senna sieberiana, its fractions (dichloromethane, ethyl acetate, and water) and ascorbic acid were tested at different concentrations. The absorbance of each sample was measured at 517 nm after 30 min using a spectrophotometer. Each experiment was done in triplicate and the absorbance of the initial ethanol DPPH solution did not change after 30 min. The DPPH free radical scavenging effect was expressed as IC50.

Statistical Analyses: Data were expressed as mean ± SEM. Analyses of variance (ANOVA) were done for the comparison of results using Fischer's test. Statistical significance was set at p˂0.05.

Extraction and Fractionation: From 125 gm of dried powdered leaves, 21.87 gm of dried leaf extract were obtained corresponding to a yield of 17.5%. The dichloromethane, ethyl acetate and water fractions represented respectively 12.74; 31.79 and 54.46% of the dried hydroethanolic leaf extract.

TABLE 1: PHYTOCHEMICAL GROUPS IDENTIFIED IN LEAF EXTRACT OF S. SIEBERIANA AND ITS FRACTIONS 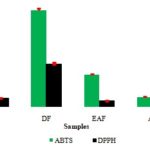 DISCUSSION: Leaves of S. sieberiana contained mainly phenolic compounds such as flavonoids, tannins and anthracenic derivatives 11. The polyphenol extraction is a crucial step for the valorization of these active principles recognized for their scavenging effect 12. The appropriate choice of solvents preserving the biological properties of these phenolic constituents is very important 13. As part of our study, we first carried out a decoction using a mixture of two polar solvents such as ethanol and water. The solvents had ability to extract polar compounds represented in S. sieberiana leaves.

However, ethanol is also able to extract nonpolar constituents such as sterols, triterpenoids and aglycones represented in the leaves of S. sieberiana. The yield of this extraction was 17.5%. From leaves of Senna alata, it has been recorded after hydroethanolic maceration an extraction yield of 12.5% 14. The difference between these values may be due to the process.

Subsequently, the liquid-liquid fractionation allowed us to successively obtain three fractions: a dichloromethane fraction containing non-polar compounds; an ethyl acetate fraction with compounds of intermediate polarity, and an aqueous fraction containing the most polar compounds. The lowest yield relative to the hydroethanolic extract was that of the dichloromethane fraction followed by those of the ethyl acetate and aqueous fractions. These results suggest that the bioactive constituents most represented in the leaves of S. sieberiana were mainly polar compounds.

The aqueous and ethyl acetate fractions had shown the better capacity to scavenge free radicals, both in ABTS and DPPH assays, than the hydro-ethanolic leaf extract and its dichloromethane fraction. Among plant samples, the aqueous fraction was seen to be the more active while the dichloro-methane fraction exhibited the lowest ability to scavenge the free radicals. What makes us suggest that polar phytoconstituents, identified in ethyl acetate and aqueous fractions had a better ability to scavenge the free radicals. The phytochemical screening had revealed the presence of flavonoids and hydrolysable tannins in ethyl acetate and aqueous fractions and not in the non-polar fraction (Dichloromethane fraction). These phenolic compounds such as flavonoids and tannins contained in these fractions could be responsible for the free radical scavenging activity. Indeed polyphenolic compounds are known for their scavenging ability 15, 16. It has been established that the antioxidant efficiency of a proton-bound A radical (AH) increases if the binding force A-H is low and the resulting radical A is as stable as possible.

This is the case for phenolic compounds such as flavonoids which are among the best electron or proton donors 17. Besides in the dichloromethane fraction had been detected condensed tannins which were also found in the ethyl acetate and aqueous fractions. The low ability of the dichloromethane solvent to extract polar phytoconstituents such as polyphenols would explain its low free radical scavenging activity in DPPH and ABTS assays.

AUTHOR CONTRIBUTIONS: This work was carried out in collaboration between all authors. Authors ADF and SIMD planned all experiments. Authors AS and MD supported the extraction, fractionation and phytochemical screening. Authors ADF, ANS, and SIMD carried out the free radical scavenging study and provided the statistical analyses of data. Author ADF wrote the first draft of the manuscript. All authors read and approved the final manuscript.

FUNDING: This research did not receive any specific grant from funding agencies in the public, commercial, or not-for-profit sectors.

CONFLICT OF INTEREST: Authors have declared that no competing interests exist.