ABSTRACT: Introduction: Lichens are known for their ability to grow in a very harsh environment, on the other hand, it is proved that the more environmental stressors, the more phytochemicals are produced in plants and fungi. So, it is assumed that lichens contain a large amount of phytochemicals, which can be a great source of medicinally active compounds. Lichen extracts are served as therapeutic agents in many disorders, and great efforts are made to analyze and quantify their phytochemical contents. Objective: Qualitative screening of 32 lichen extracts, quantification of phytochemicals and total antioxidant capacity in some rich content extracts, and finally correlation of quantified phytochemical classes with their antioxidant activity. Methodology: Qualitative and quantitative screening was performed using standard methods and construction of standard compounds’ calibration line. Pearson’s bivariate correlation test was carried out for determination of correlation coefficient and coefficient determination. Results: Evaluated extracts were rich in flavonoids, phenols, and carotenoids, also phenols, flavonoids and antioxidant contents were internally correlated. Conclusion: According to the significant correlation between phenols, flavonoids and antioxidant contents, it was concluded that antioxidant effect of lichen extracts is due to the high amount of phenolic and flavonoids compounds, while carotenoid compounds does not promote antioxidant activity in lichen extracts.

INTRODUCTION: Phytochemicals are largely responsible for the prevention of different disorders including cancer, cardiovascular disease, type 2 Diabetes and neurodegeneration by their vitamins and mineral contents 1. Natural phenolic and flavonoid compounds are thought to provide health benefits in decreasing the risk of disease, particularly certain cancers and eye disease 2.

They play an important role in cancer prevention and treatment 3. Lichens produce a variety of secondary metabolites from fungal metabolism, and most of them are unique 4. Lichen substances include aliphatic, cycloaliphatic, aromatic, terpenic and phenolic components 5. Medicinal effects of various lichen species are proved, and the current focus of scientists is on their chemical composition.

It is proved that plants and fungi typically produce several phytochemicals that act as a protective mechanism against environmental stressors; the more environmental stressors, the more phyto-chemicals are produced. As a result, phytochemical content can vary with growing conditions 1. Lichens are known for their ability to grow in very harsh environment, and nothing can stop their growth. So, it can be assumed that they may contain a large amount of phytochemicals, which can be a great source of medicinally active compounds. In this study, eight lichen species were extracted with a various organic solvent, their mass production, % yield and color of each extract was analyzed, and then they were subjected for qualitative and quantitative analysis. Correlation studies among quantified phytochemicals also were performed which illustrated interesting outcomes.

Extraction: Lichen species were extracted by four organic solvents; hexane, ethyl acetate, methanol, and ethanol. Final obtained yield is a measure of the solvent’s efficiency to extract specific components from sample 6. Percentage of yield was calculated by the following formula:

Qualitative Analysis: Different tests were carried out on all extracts by the standard procedure to identify the constituents present in lichen extracts as described by Sofowora (1993) 7, Harborne (1998) 8 and Uma, et al., (2014) 9.

Quantitative Analysis: To quantify the most present phytochemicals in extracts, phenol, flavonoid, carotenoid, and antioxidant compound’s contents were estimated from the calibration line of their specific standard. Graphs were constructed in GraphPad Prism®6.1.

Total Phenol Content (TPC): It was determined by the Folin-Ciocalteu method of Singleton et al., (1999) 10. Concentration of each extract was 1mg/ml. The reaction mixture was prepared by mixing 0.5 ml of extract; 2.5 ml of 10% Folin-Ciocalteu reagent dissolved in water and 2.5 ml 7.5% NaHCO3. Samples were incubated at 45 ºC for 45 min. The absorbance of each sample was determined by spectrophotometer at 765 nm. Blank was prepared with respected solvent.

The procedure was repeated for the standard solution of Gallic acid (GA) and Tannic acid (TA) at different concentrations to construct a calibration line for content determination. Phenolic content is expressed as μg of GA/g of extract and mg of TA/g of extract.

Total Carotenoid Content (TCC): Total carotenoids concentration was quantified according to Rodriguez-Amaya (2014) 11. A 1g of lichen was homogenized in 20 mL acetone, and the supernatant decanted. This process was repeated until a colorless solution was obtained.

Total Flavonoid Content (TFC): The content of flavonoids in the lichen extracts was determined using the spectrophotometric method of Stanković et al., (2010) 12. One ml of 1mg/ml extract was added to 1ml of 2% AlCl3 solution dissolved in methanol. After 1 h incubation, absorbance was measured spectrophotometerically at 415 nm.

Total Antioxidant Capacity (TAC): Lichen extracts were investigated for their total antioxidant capacity by the method of Prieto et al., (1999) 13. To make the reaction reagent, 0.6 M sulfuric acid was added to 28 mM sodium phosphate and 4 mM ammonium molybdate, and 1 ml of this solution was added to 0.1 ml of each sample with 100 µg/ml concentration.

Test tubes were airtight and kept in a boiling water bath at 95 °C for 90 min. After cooling, the absorbance of each extract was measured at 695 nm against blank in a spectrophotometer. Ascorbic acid (AA) was used as standard and TAC is expressed as mg of AA/g of extract.

Final concentration and percent yield of extraction were from 26 mg/ml and 2.1% (in case of ethanol extract of H. leucomelos) to 250 mg/ml, and 20.8% in case of methanol extract of P. tinctorum. Color of each extract, which represents its phytochemical group and pigment, is presented in Table 1.

TABLE 1: COLOR, CONCENTRATION IN mg/ml AND % YIELD OF LICHEN EXTRACTS

Anthocyanin compounds were presented in reddish to bluish lichen extracts, and yellow shade extracts mostly contained anthraquinones. Color of natural extracts is due to different phytochemicals and secondary metabolites present in each species. Presence of anthocyanin may be responsible for reddish or bluish shade in methanol extract of Herpothallon sp., P. tinctorum, Leptogium sp. and H. lucomelos. Yellow color in ethanol extract of P. crinitum and Herpothallon sp. may be due to the presence of anthraquinones. High level of carotenoid in Herpothallon sp., Leptogium sp., and R. celastri may be responsible for orange shade in these extracts. The formation of yellow color indicated the presence of flavonoids while the brown color formation indicated the presence of alkaloids and terpenoids.

Qualitative Phytochemical Screening of all Lichen Species: Flavonoids were found to be the most widely distributed group of phytochemicals in all lichen extracts, followed by phenols, carotenoids, steroids, carbohydrates, reducing sugars, xanthoproteins, alkaloids, anthraquinones, terpenoids, and other minor present groups Table 2. It was observed that methanol extract harboured more phytochemicals.

The order of lichen species by their harbored phytochemicals was as follow P. tinctorum, P. reticulatum, P. crinitum, H. leucomelos, Herpothallon sp., C. subradiata, and Leptogium. Saponin and cardiac glycosides were rarely present in lichen’s crude extracts while they were rich in phenol and flavonoids.

Quantification of Phytochemicals in Lichen Extracts: Phenolic, flavonoid and carotenoid components were observed in almost all species; therefore, these groups were subjected to quantify their content in each extract based on individual standard calibration line. Since, tested lichen extracts were high in these classes of phytochemicals, their antioxidant content also was quantified. Calibration line of each standard chemical used in this study was constructed and from them, the concentration of phenolic, flavonoid, carotenoid, and antioxidant contents were calculated based on an obtained formula from the Trend line, where Y is measured O.D. and X is unknown concentration Fig. 1. Results showed that methanol extract of all lichen samples has the highest amount of phytochemicals in term of their standards equivalent and ethanol had the least. Flavonoid compounds were the most available phytochemicals in all lichen extracts. Gallic acid could present higher phenolic compounds in lichen extracts than tannic acid standard. 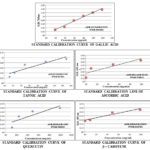 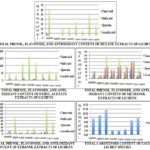 Correlation Study Among all Quantified Phytochemical Classes: Coefficient determination and correlation coefficient were computed for each set of data and correlation assessed on the base of a significant level of calculated parameters. All data set passed the normality test and follow bivariate Gaussian distribution. According to significant correlation between phenols, flavonoids and antioxidant contents, it is observed that antioxidant effect of lichen extracts is due to the high amount of phenolic and flavonoids compounds, but carotenoid compounds do not correlate with mentioned groups of phytochemicals Table 4, Fig. 3. 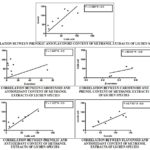 TABLE 4: CORRELATION BASED ON PEARSON’S EQUATION AMONG DIFFERENT PHYTOCHEMICAL CLASSES

DISCUSSION AND CONCLUSION: Murugan et al., (2013) 6 had used different extraction method and found out that in successive Soxhlet extraction methanol had higher extraction yield followed by ethyl acetate, n-hexane, and ethanol. This founding corroborates with our observation from the extraction process. Tariq et al., (2013) 14 performed photo-chemical analysis of Terminalia chebula extracts of leaves, fruits, seed, stem, and roots and found that yellow color extract is rich in flavonoids while the brown extracts were high in alkaloids and terpenoids.

In our study also, specific phytochemicals were found responsible for certain colors. Sharma et al., (2012) 15 had quantified the antioxidant capacity of methanolic extracts of Parmotrema reticulatum as 1.58μg Vitamin E equivalent / mg, and that of Usnea sp. was 0.690 μg Vitamin E equivalent /mg respectively, while in our study methanolic extract of same species had 69.8 mg of AA/ g of extract. He also quantified the amount of phenolic and flavonoid of this lichen extract as of 151 TA/mg of sample and 1.38 μg of Quercetin/ mg of sample while in our study it is 6.55 mg of TA/g of extract, 39.9 μg of GA/g of extract and 84.4 mg of Quercetin/g of extract. Correlation studies showed that Phenol / Antioxidant contents are perfectly correlated (r = 0.9153), as well as Flavonoid / Antioxidant (r = 0.8383) and Phenol / Flavonoid (r = 0.7552), while Carotenoid/ Antioxidant (r = -0.2647) and Carotenoid / Phenol (r = 0.4954) are not correlated. The extensive correlation studies in this work used to evaluate the relation between critical values of studies, correlation studies between phenols and glucosidase, as well as carotenoids with phenols/flavonoids and with antioxidants, are first reports on lichen studies 16-19.

Statistical Analysis: All analyses were carried out in triplicates, and the mean value of absorbance ± SD was taken for analysis. Calibration lines were made using Microsoft Excel, and correlation graph was constructed by GraphPad Prism 6® Software. To find out correlation coefficients (r) between individual groups, Pearson’s bivariate correlation test was done. r near to 1 indicates strong positive relationship and near to -1 shows reverse (negative) relation. P-value < 0.05 considered as significant value to reject null hypothesis. For this level of significance (α < 0.05) in a directional test, t ≤ 1.70 considered to reject the null hypothesis and indicates the correlation is not by chance coincidence.

Funding Sources: This research did not receive any specific grant from funding agencies in the public, commercial, or not-for-profit sectors.

CONFLICT OF INTEREST: The authors declare no conflict of interest in any form.