ABSTRACT: Cissus quadrangularis Linn. is a succulent plant of family Vitaceae commonly found in tropical and subtropical xeric wood. It is a fleshy, cactus-like liana widely used as a common food item in India. The plant is prescribed in the ancient Ayurvedic literature as a general tonic and analgesic, with specific bone fracture healing properties. The plant is believed to be useful in helminthiasis, anorexia, dyspepsia, colic, flatulence, skin diseases, leprosy, hemorrhage, epilepsy, convulsion, hemoptysis, tumors, chronic ulcers, swellings. Following various folk claims for the cure of various diseases, efforts have been made by researchers to verify the efficacy of the plant through scientific biological screening. The scrutiny of literature revealed some notable pharmacological activities of the plant such as antioxidant, free radical scavenging, antimicrobial, antibacterial, bone healing, antiulcer, analgesic, anti-inflammatory and diuretic, presented in this review such that the potential use of the plant either in pharmaceutics or as an agriculture resource can be evaluated. The present review is an attempt to highlight phytochemicals, various traditional uses as well as pharmacological reports on Cissus quadrangularis L.

INTRODUCTION: Cissus quadrangularis L. is commonly known as Asthisamhari. It is a succulent plant of family Vitaceae commonly found throughout the hotter parts of India. It can be cultivated in plains coastal areas, jungles, and wastelands up to 500 m elevation. The plant is propagated using cuttings. Plant flowers in the month of June-December. Plant material occurs as pieces of varying lengths; stem quadrangular, 4-winged, internodes 4-15 cm long and 1-2 cm thick 1, 2. The surface is smooth, glabrous, buff colored with a greenish tinge, angular portion reddish-brown; no taste and odor.

The whole plant including all parts such as stems, leaves, roots is documented to possess medicinal properties in ethnobotanical surveys conducted by ethnobotanists in the traditional system of medicine. The present review will possibly help to bridge between traditional claims and modern therapy on Cissus quadrangularis L. and also pinpoints unexplored potential of it 5. 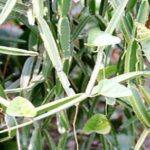 Strength as per Ayurvedic Pharmacopoeia of India: 13

Phytochemistry: Phytochemical studies of Cissus quadrangularis have shown the presence of various versatile constituents such as flavonoids, triterpenoids, vitamin C, stilbene derivatives and many others, e.g., resveratrol, piceatannol, pallidal parthenocissus and phytosterols. Out of which ascorbic acid, triterpene, β-sitosterol, ketosteroid, two asymmetrical tetracyclic triterpenoids, and calcium were identified as major constituents of this plant 10.

Constituents such as flavonoids quercetin and kaempferol, and stilbene derivatives, quadrangularins A, B, C, and many others, e.g. resveratrol, piceatannol, pallidal, parthenocissus and phyto sterols have been isolated from the plant. Stem extract contains a high percentage of calcium ions and phosphorus, both essential for bone growth 12.

Traditional Uses: The roots and stems are most useful for healing of a fracture of the bones. The stem is bitter; it is given internally and applied topically in broken bones, used in complaints of the back and spine. A paste of stem is useful for muscular pains. The plant has been documented in Ayurveda for the treatment of osteoarthritis, rheumatoid arthritis, and osteoporosis. The stem juice of the plant is used to treat scurvy, menstrual disorders, otorrhoea, and epistaxis. The use of sap with tamarind has been reported in East Africa for the treatment of gonorrhea. The herb is fed to cattle to induce flow of milk. The ash of plant is useful as a substitute for baking powder 9.

A paste of stem is given in asthma, burns and wounds, bites of poisonous insects and for saddle sores of horses and camels.A decoction of shoots with dry ginger and black pepper is given for body pain the infusion of the plant is anthelmintic.Leaves and young shoots are powerful alternatives, dried and powdered; they are administering in certain bowel infections connected with indigestion.

Bone Healing Activity: Cissus quadrangularis (Vitaceae), a rambling shrub, characterized by a thick quadrangular fleshy stout stem, Commonly known as the “Bone Setter,” the plant is referred to as “Asthisamdhani” in Sanskrit and “Hadjod” in Hindi because of its ability to join bones 6-8.

The anabolic steroidal principles from Cissus quadrangularis showed a marked influence in the rate of fracture healing by influencing early regeneration of all connective tissues involved in the healing and quicker mineralization of callus. Systemic use of Cissus quadrangularis in rats caused complete restoration of normal composition of bone, after fracture in four weeks while the controls required six weeks. There was a shortening of about two weeks in the bone healing duration. The total weight of the fractured bone also came down towards normal much earlier than the controls indicating quickest bone remodeling.

All the events namely fibroblastic phase (first week), collagen phase (second week) and osteochondral phase (third and fourth weeks) were hastened by about 10 to 14 days in the treated group. This hastening in the fracture healing was attributed to the stimulation of all the cells of mesenchymal origin, namely the fibroblasts, the chondroblasts and osteoblasts by Cissus quadrangularis. It has greater impact on osteoblastic proliferation than other cellular responses. In both, the models the muco-polysaccharide and collagen levels of the bones in the treated group came down to normal at the end of only four weeks while the control required 6 weeks as confirmed with histological and histochemical observations.

Thus Cissus quadrangularis builds up the chemical composition of the fractured bone namely its muco-polysaccharides, collagen, calcium, phosphorus, and others as well as its functional efficiency. A paste of alcoholic extract of the plant was locally as well as intramuscularly facilitates rapid healing of the fracture in albino rats. Ethanol extract (95%) enhanced the development of cortical bone and trabeculae in fetal tumor, which may be related to the rich content of calcium, phosphorous and phytoestrogenic steroids and shown to influence early regeneration and quick mineralization of bone fracture healing process. Ethanol extract (95%) of the whole plant possess antiosteoporotic activity in an ovariectomized rat model of osteoporosis at two different dose levels of 500 and 750 mg per kg per weight 15-17.

Formulation and Dosage: A decoction of dried stalks: 10-30 ml bid

Results: The fresh plant is green in color which on drying shows buff color with greenish ting. The odor is characteristic with an acrid taste. The surface of fresh plant material is smooth and glabrous to touch. Fresh stems are thick, fleshy, quadrangular with acutely 4 winged internodes whereas leaves are simple, opposed, thickly coriaceous, ovate or reniform, highly coiled.

Transverse section of stem showed a squarish outline with a prominent projection at each annular point. The epidermis is single layered, covered externally with thick cuticle. The epidermal cells are thin-walled rectangular and tangentially elongated, followed by 2-3 layers of cork. The cortex is composed of 8-16 layers of thin-walled, circular to oval parenchymatous cells; four patches of collenchymatous cells present in all the four angular points embedded in the cortical region like an umbrella arching over large vascular bundles. The cortical cells are filled with brown-red contents.

The endodermis is not distinct, and stele consists of a large number of vascular bundles varying in size, in each angular region, below collenchymatous patch, while resting of bundles smaller in size. Vascular bundles are the collateral and open type, capped by the sclerenchymatous sheath, which is well developed in larger bundles. The cambium and interfascicular cambium are quite distinct; central region occupied by wide pith composed of thin-walled, circular to oval parenchymatous cells. Idioblasts containing raphides and acicular crystals of calcium oxalate present in the outer region of cortex and number of cells throughout the region.

DISCUSSION: The macroscopic, as well as microscopic studies of any drug material, are the preliminary steps for establishing the botanical parameters before any kind of study. As per WHO guidelines, botanical standards are to be proposed as a protocol for the diagnosis of the herbal drug. The quantitative determinations of some physicochemical parameters are useful for setting standards for crude drugs. The constant physical evaluation is an important parameter in detecting adulteration or improper handling of the drug. Since, the plant Cissus quadrangularis Linn. is useful in the traditional system of medicine in the treatment of various diseases, it is essential to standardize it for use as a drug. The macroscopic studies, microscopic studies and physicochemical parameters reported in this work could be useful for the compilation of a suitable monograph for its proper identification 18-20.

CONCLUSION: In recent years, ethnobotanical and traditional uses of natural compounds, especially of plant origin received much attention as they are well tested for their efficacy and generally believed to be safe for human use. They deserve scrutiny on modern scientific lines such as phytochemical investigation, biological evaluation on experimental animal models, toxicity studies, investigation of the molecular mechanism of action of isolated phyto principles and their clinical trials. It is the best classical approach in of new lead molecules for management of various diseases.

Our thorough screening of literature available on Cissus quadrangularis depicted an interesting fact that though the plant is a popular remedy for a variety of ailments and a range of formulations has been marketed, little effort has been made to verify its purity, quality, and efficacy through scientific screening. In the future study, the isolated principles from Cissus quadrangularis needs to be evaluated in a scientific manner using specific experimental animal models and clinical trials to understand the molecular mechanism of action, in search of the lead molecule from natural resources.