ABSTRACT: The present study aims to standardize Amritarishta based upon chromatographic and spectral studies. The spectral data and HPTLC fingerprint of ethanolic extract of Amritarishta could be used as a valuable analytical tool in the routine standardization of Amritarishta to check the batch to bath variation.  Fraction, I and II of ethanolic extract of Amritarishta and standard luteolin and apigenin, were compared by TLC, HPTLC, and HPLC analysis to evaluate the presence of luteolin and apigenin is employing toluene: ethyl acetate: glacial acetic acid (5:4:1 v/v/v), as a mobile phase respectively. The Rf values (0.64) and (0.81) for luteolin and apigenin in both sample and reference standard were found comparable under UV light at 366 nm respectively. The High-Performance Thin Layer Chromatography method developed for quantization was simple, accurate and specific. The present standardization provides a specific and accurate tool to develop qualifications for identity, transparency, and reproducibility of biomarkers luteolin and apigenin in a liquid formulation.

INTRODUCTION: Ayurveda is considered by many scientists to be the oldest healing science. In Sanskrit, Ayurveda means “The Science of Life.” Ayurvedic knowledge originated in India more than 5,000 years ago and is often called the “Mother of All Healing” 1. Ayurveda translates into knowledge (Veda) of life (Ayur) and is one of the oldest and still widely practiced medical systems in the Indian subcontinent 2. The concept of Ayurvedic medicine is to promote health, rather than to fight disease, and Ayurveda in daily life aims at maintaining harmony between nature and the “individual” to ensure optimal health 1.

Ayurveda contains 8 branches of sciences and 10 different diagnostic tools based on tridosha theory (three senses of humour of the body). Ayurveda comprises of various types of medicines including the fermented forms namely arishtas (fermented decoctions) and asavas (fermented infusions). These are regarded as valuable therapeutics due to their efficacy and desirable features.

Amritarishta is a polyherbal hydroalcoholic Ayurvedic preparation and is used as an antioxidant and advised as a choice of remedy in mostly all types of fevers 3. The chief ingredient of Amritarishta is guduchi, the dried stem of Tinospora cordifolia. The chemical constituents reported from stems of Tinospora cordifolia belong to different classes such as alkaloids as tinosporin 4, 5, glycosides as cordifoliosides-A and cordifolioside-B 6, 7, steroids as sitosterol, sesquiterpenoid as tinocordifolinand a large amount of phenolic compounds as gallic acid, ellagic acid, catechin and epicatechin 8 and apigenin 7-O-beta rhamno pyranosyl 9. These compounds have many notable medicinal properties as antidiabetic 10, hepatoprotective 11, antioxidant 12, antimalarial 13, immunomodulatory 14 and antineoplastic properties 15.

Chemicals: Chloroform, formic acid, ethyl acetate, toluene were purchased from Merck, India. Methanol and ethanol of analytical reagent grade (Merck, Darmstadt, Germany) were used. Apigenin and luteolin reference standard were purchased from Sigma-Aldrich GmbH, Germany. All other solvents and chemicals were of the highest analytical grade.

Apparatus: All the solvents purchased from E. Merck and S.D. Fine Chemicals, Mumbai. All solvents used for extraction, TLC and HPTLC studies were distilled before use. Solvents used for UV and IR studies were of spectroscopy grade. Solvents used for HPLC analysis were of HPLC grade. Precoated silica gel GF-254 plates procured from E. Merck, Mumbai were used for TLC and HPTLC studies. The UV spectra were recorded on a JASCO V 530 spectrophotometer. The FT IR spectra were recorded on JASCO FT IR 410. Atron HPTLC system consisting of Sparylin spotting, elite-miniluminascence photo documentation and CAMAG scanner. The HPLC analyses were done on a TOSOH–CCPM system. All the results are obtained by repetition of each experiment at least three times.

Preparation of Extracts: Dry 50ml of formulation in vacuum to remove the self-generated alcohol. The dried material was extracted with 250ml ethanol in a Soxhlet extractor at a temperature of 45-50 °C for 48 h. The extract obtained was then concentrated under reduced pressure using rotary evaporator which concentrates bulky solution down to small volumes, without bumping, at temperatures between 30 and 40 °C.

Qualitative Chemical Examination: The ethanolic extracts were qualitatively evaluated by chemical tests and TLC studies for the presence of various phytoconstituents like alkaloids, carbohydrates, saponins, phenolic compounds and tannins, phytosterols and anthraquinone glycosides16.

Isolation of Apigenin and Luteolin: Add 50 ml of water to dissolve the extract and partition successively with n-hexane (50×3), chloroform (50×3) and ethyl acetate (50×3) filter and concentrate the ethyl acetate extract under vacuum and weight. Dissolve 20 mg of residue in 1 ml of methanol 17.

TLC Studies: After preliminary chemical testing and isolation process the crude dried extract was obtained.  TLC studies of ethanolic extracts were carried out using Silica gel GF-254 as the stationary phase and Toluene: Ethyl acetate: Glacial acetic acid (5:4:1 v/v/v) as the mobile phase. Spots were observed under UV and visible light. Ethanolic extract was found to contain well-resolved fluorescent components. Out of the four components, two components were separated in an appreciable amount by preparative TLC using the same mobile phase. The fractions were separated as isolated fractions I and II, respectively. The Rf value of isolated fractions I and II was calculated.

HPLC Studies: Isolated fractions I and II indicated the presence of apigenin and luteolin which is reported to be a major active component of Amritarishta formulation. The extract was analyzed by HPLC using the following conditions:

Ethanolic extract of Amritarishta formulation was subjected to qualitative chemical investigation. A summary of the qualitative analysis is given in Table 2.

(+) Indicates presence, (−) indicates absence. The chemical evaluation reported here is for the entire extract and not for the individual spot.

TLC Study: After proper resolution, the spot of apigenin and luteolin was observed in the UV chamber. The developed preparative TLC in UV chamber was shown in Fig. 1. TLC profile and HPTLC fingerprints were developed for ethanolic extract. The TLC profile of ethanolic extract was found to contain four fluorescent components that were well resolved.

Fractions I and II were evaluated by chemical and spectral methods to study the nature of the components. The color characteristics in UV and visible light revealed the presence of flavones and flavonol in fraction I and isoflavones in fraction II. Table 3. Spectral studies confirmed the results of TLC studies. UV and IR spectra of fraction I and II gave characteristic peaks indicating presence of Flavones. The UV, IR spectra and HPTLC fingerprints of fractions I and II can be used for routine standardization of Amritarishta Table 4. 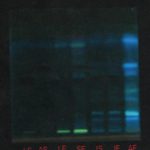 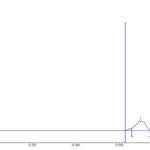 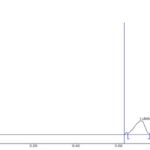 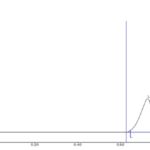 FIG. 5: HPTLC CHROMATOGRAM OF LUTEOLIN AND APIGENIN ISOLATED FROM FORMULATION 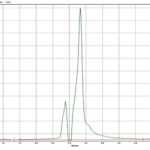 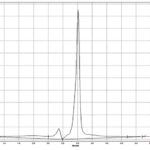 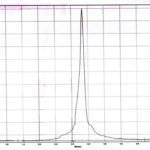 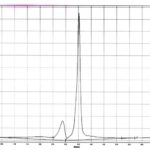 ACKNOWLEDGEMENT: This work is financially supported by the University Grants Commission, New Delhi under Major Research Project [Grant No.42-708/2013(SR)]. Authors are also thankful to Principal D. D. Chougule of Appasaheb Birnale College of Pharmacy Sangli for providing the necessary facilities to carry out this work.