ABSTRACT: Antigonon leptopus Hook & Arn (family Polygonaceae), also called: Chain of love, Queen’s Wreath and Mexican creeper is a fast-growing vine with stems reaching up to 20 feet long. It has heart-shaped, green leaves climbing by tendrils which wrap around many types of supports. It is native to Mexico and commonly found in tropical Asia, Africa, the Caribbean, and the Americas. It possesses anticoagulant activity, analgesic, anti-thrombin, anti-inflammatory, anti-diabetic, and anti-depressant activities. Aerial parts of the vine have been used as hepatoprotective and for spleen disorders. The vine was hardly growing and greatly affected by the relatively high temperature, as well as a shortage of water throughout the year in “El-Zohreya” Park, Cairo; thus to increase the plant propagation a tissue culture study was conducted. The formation of callus tissue from the leaf explants revealed promising results. Detection of the flavonoidal content by HPLC analysis was also performed on the different callus cultures, supplemented with different concentrations of the growth hormone regulator naphthalene acetic acid (NAA).

INTRODUCTION: Antigonon leptopus, is one of the species of belonging to the buckwheat family, Polygonaceae. It is native to Mexico, India and commonly found in tropical Asia, Africa, the Caribbean, and the Americas. It is known as the coral vine or Mexican creeper. It is a fast growing vine with the stems reaching 20 feet long. It climbs by tendrils which wrap around many types of supports. The tea prepared from the aerial portion of A. leptopus is used for the prevention and treatment of cough, sore throat, flu, and menstrual pains. Flowers are used to treating high blood pressure. Leaves possess anti-coagulant, analgesic, anti-thrombin, anti-inflammatory, and anti-diabetic activities. Also, they have been used as hepato-protective, treating asthma, liver and spleen disorders 1, 2, 3, 4, 5, 6, 7.

Reviewing the available literature, few studies were traced to the establishment of Antigonon leptopus callus cultures. The vine was hardly growing and greatly affected by the relatively high temperature and by the shortage of water throughout the year in “El-Zohreya” Park, Cairo. This encouraged the author to undergo preliminary tissue culture study, to increase the plant propagation, as well as examining the flavonoids formed in the explants produced. The study was performed on sterile Murashige and Skoog Basal Medium (MS) media, using different concentrations of growth hormone regulator naphthalene acetic acid (NAA).

Plant Identification: Samples of Antigonon leptopus used in this study were collected from “El-Zohreya” Park, Cairo, Egypt during the flowering stage (Spring 2016). A flowering branch was kindly authenticated by Mrs. Terase Labib, plant taxonomist of Orman garden, Giza, Egypt. The voucher specimen has been deposited in the herbarium of Department of Pharmacognosy, Faculty of Pharmacy, Cairo University “20.12. 15.1”.

Plant Material (Explants): Fresh aerial parts of the vine “leaves, stems and flowers” each separately was cut into smaller sections and washed in a pyrex glass jar using detergent-water mixture for about 30 min. The washed plant material was transferred to sterilizing agent solution of sodium hypochlorite 1-2% and soaked for 30 min, removed and washed with sterile distilled water to remove the excess sterilizing agent.

Media: Several media were used in the tissue culture study as described in (Plant propagation by tissue culture, 2008) 8. The best results were obtained by using Murashige and Skoog Basal Medium (MS) 9. It was kindly supplied by the Agriculture Research Center, Faculty of Agriculture, Cairo University. The classic plant cell culture medium components containing macro-nutrients, micro-nutrients, and vitamins are shown in Table 1.

Growth Hormones:  Auxins; naphthalene acetic acid (NAA) and cytokinins; benzylaminopurine (BAP) to stimulate growth. They were used in different concentrations, according to the condition of the experiment applied.

Vessels and Other Material:

All the methods adopted in the tissue culture study of the aerial parts of the vine were based on the basic published science as described in (Cell culture basics, 2015) 10, 11. This technique followed is discussed as follows:

Preparation and Sterilization of the Growing Explants: As mentioned before in plant material (explants) preparation.

Preparation and Sterilization of the Growing Medium: The commercial (MS) medium was dissolved in distilled water about 800 ml. Sucrose 30 g was added and stirred until dissolved. The pH was adjusted to (5.8) using NaOH 1M and HCl 1M as necessary while gently stirring. About 10 gm of agar was added, and the volume was completed with distilled water to 1 L. The solution was heated gently while stirring until all the agar has dissolved. The still warm medium was poured into the sterilized pyrex glass jars to a depth of about 4 cm. The pyrex glass jars (with closures but not tightened) were placed in a pressure cooker and sterilized for one hour. Finally, the pressure cooker was cooled, the pyrex glass jars were removed and the closures were tightened.

Transfer of Plant Aerial Parts to Tissue Culture Medium: The sterilized plant leaves, stems with attached tendrils and flowers, each separately, were cut using scalpel blades into smaller squares about 1 cm in length. Using sterile forceps, leaves were partially submerged into the medium in the sterilized pyrex glass jars.

Stems and flower buds were placed so that the shoots and buds were facing upwards with the medium surface. The pyrex glass jars were tightly closed and kept in fluorescent-lighted room set at 25 ºC, minimum 12 h/ day, for at least 4 weeks.

HPLC Agilent (series 1200) equipped with auto sampling injector, solvent degasser, and quaternary HP pump was used. Ultraviolet (UV) detector was set at 330 nm for analysis of the flavonoid components. Dionex bounded silica C18 column was used (4.6 × 150 mm 3 μm). Acetonitrile and 0.1% of water were used as the mobile phase. Nitrogen (N2) carrier gas was used at the injection volume of 20 μl, and the rate was kept at (12 L/min). The injector temperature was set at 38 °C, while that of the detector was set at 350 °C. The range used was from 100-400 m/z. (Food Technology Research Institute, Giza, Egypt).

Induction of Callus Cultures from the Aerial Parts of Antigonon leptopus: Different explants were obtained from different organs of the aerial parts of Antigonon leptopus (leaf, petiole, stem, and flowers) each alone. They were cleaned and sterilized using the sterilizing agent sodium hypochlorite solution (1-2%), as mentioned in the materials and methods section. They were germinated on sterile medium (MS) to produce seedlings from each. Germination was performed and followed up to obtain the expected callus tissue, according to the following procedure:

Dissection of uniform sized explants (of about 1cm length) from leaf, petiole, stem, and flower, each separately, was performed by using sterile scalpel and forceps under aseptic conditions. The different explants were cultured in jars containing sterile MS media, supplemented with different concentrations of various plant growth regulators as naphthalene acetic acid (NAA), indole butyric acid (IBA). In each condition twenty jars were prepared, each jar contained four explants. The culture was incubated in 16 h /day, light (1500-200 lux) at 20ºC (±2 ºC), over 4-8 weeks. After this period, the callus aging process occurred and severe browning. So, no need for the culture to be incubated for over 8 weeks.

RESULTS: A photograph of the callus produced by leaf explants of Antigonon leptopus grown in-vitro on MS medium supplemented with NAA is shown in Fig. 1. The morphological characters of different callus cultures of leaf explants are shown in Table 2. 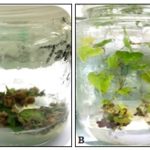 Survival Percentage of Callus Culture Tissue of Antigonon leptopus: The most successful callus cultures were the following:

TABLE 3: SURVIVAL PERCENTAGE CALLUS CULTURE TISSUE OF THE LEAF EXPLANTS OF A. LEPTOPUS

The results are summarized in Table 3.

TABLE 4: HPLC ANALYSIS OF THE FLAVONOID CONTENT OF CALLUS CULTURES (I, II, III) OF LEAF EXPLANTS OF ANTIGONON LEPTOPUS 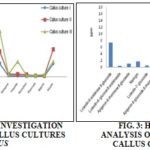 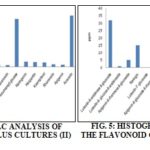 DISCUSSION: Successful growth of leaf explants with the formation of callus was observed on the 4th week and lasted till the 8th week. Maximum callus development was achieved on MS medium supplemented with (6 mg/L) NAA (85%) (Callus culture III) as shown in table (3). HPLC analysis, as shown in Fig. 2-5, revealed luteolin-6-arabinose-8-glucoside (36.04 ppm), acacetin (16.09 ppm) and hesperidin (35.86 ppm) as the major flavonoids in callus cultures (I, II, III) respectively. Moreover, it is obvious that callus culture III recorded the highest concentrations of flavonoids compounds, as regards to the others. Hesperidin (35.86 ppm), luteolin-6-arabinose8-glucoside (31.85 ppm) and kaempferol 3, (2-p-coumaroyl) glucose (26.92 ppm) were the major compounds in callus culture III.

ACKNOWLEDGEMENT: The author is thankful to the Agriculture Research Center, Faculty of Agriculture, Cairo University, for all the facilities provided. Special thanks are also owed to the Food Technology Research Institute, Giza, Egypt, for carrying out the HPLC analysis.