ABSTRACT: Moringa oleifera, an important medicinal plant is one of the most widely cultivated species of the family Moringaceae. It is highly valued from time immemorial because of its vast medicinal properties. The present article provides all necessary information regarding its phytochemical investigations, morphological studies and medicinal properties like anaemia, anxiety, asthma, blackheads, blood impurities, bronchitis, catarrh, chest congestion, cholera, conjunctivitis, cough, diarrhoea, eye and ear infections, fever, abnormal blood pressure, pain in joints, scurvy, semen deficiency, headaches and tuberculosis. The aqueous extract of moringa used to treat corn, callus, cut, wounds and skin infection. The present study is that Moringa oleifera is having a higher biological potential to treat calcium deficiency. Every part of Moringa is said to have beneficial properties that can serve humanity so the whole plant can be extensively studied for further research aspects.

INTRODUCTION: In the last few decades there has been an exponential growth in the field of herbal medicine. It is getting popularized in developing and developed countries owing to its natural origin and lesser side effects 1. Herbal drugs constitute a major share of all the officially recognized systems of health in India viz. Ayurveda, Yoga, Unani, Siddha, Homeopathy, and Naturopathy, except Allopathy. More than 70% of India's 1.1 billion populations still use these non-allopathic systems of medicine 2. In many developing countries, a large proportion of the population relies on traditional practitioners and their armamentarium of medicinal plants to meet health care needs.

Although, modern medicines may exist side-by-side with such traditional practice, herbal medicines have often maintained their popularity for historical and cultural reasons. Such products have become more widely available commercially, especially in developed countries. Use of herbal medicines in developed countries has expanded sharply in the latter half of the twentieth century. In India, herbal drugs are an integral part of The Indian System of Medicine (Ayurveda) which is an ancient and mainstream system 3.

The evaluation of various plant products according to their traditional uses and medicinal value based on their therapeutic efficacy leads to the discovery of newer and recent drugs for treating various ailments. This fact forms the basis for the development of new drugs from various plant sources. One of such plants of medicinal value is Moringa olifera, belonging to the family Moringaceae, commonly known as ‘Sahajan’ in Hindi, Horse radish in English.

It is a small, fast, growing, evergreen, or deciduous tree that usually grows up to 10 or 12 m in height. It is distributed among Sub Himalayan Tracts, Assam, Bengal and Peninsular India 4. Various properties are attributed to it like an antispasmodic, diuretic, expectorant and abortifacient 5.

Moringa oleifera is commonly known as Moringa, drumstick tree, horseradish tree, ben oil tree, or benzoil tree is the only genus in the family Moringaceae. The plant is native to north-western India and widely cultivated in tropical and subtropical areas. It is the most widely cultivated species of the genus Moringa, and its young seed pods and leaves are used as vegetables. All parts of the Moringa tree are edible and have long been consumed by humans. Moringa is used worldwide in the traditional medicine, for various health conditions, such as skin infections, anemia, anxiety, asthma, blackheads, blood impurities, bronchitis, catarrh, chest congestion, cholera, infections, fever, glandular, swelling, headaches, abnormal blood pressure, hysteria, pain in joints, pimples, psoriasis, respiratory disorders, scurvy, semen deficiency, sore throat, sprain, tuberculosis, for intestinal worms, lactation, diabetes, and pregnancy. In many regions of Africa, it is widely consumed for self-medication by patients affected by diabetes, hypertension, or HIV/AIDS.

Moringa oil has tremendous cosmetic value and is used in body and hair care as a moisturizer and skin conditioner. It has been shown that aqueous, hydroalcoholic, or alcohol extracts of M. oleifera leave possess a wide range of additional biological activities including antioxidant, tissue protective (liver, kidneys, heart, testes, and lungs), analgesic, antiulcer, antihypertensive, radio-protective, and immunomodulatory actions. Phytochemical analyses have shown that M. oleifera is a rich source of potassium, calcium, phosphorous, iron, Vitamins A and D, essential amino acids, as well as known antioxidants, such as β-carotene, vitamin C, and flavonoids.

A wide variety of polyphenols and phenolic acids as well as flavonoids, glucosinolates, and possibly alkaloids are believed to be responsible for the effects of the plant. This chapter is intended to compile the pharmacological effects of M. oleifera as well as its phytochemical constituents.

Geographical Source: The tree is wild in the Sub-Himalayan tracts from Chenab to Oudh. It grows at elevations from sea level to 1400 m. It is very commonly cultivated near houses in Assam, Bengal and peninsular India. It is a prolific coppicer 4. It is also cultivated in North-Eastern Pakistan, North-Eastern Bangladesh, Sri Lanka, West Asia, the Arabian Peninsula, East, and West Africa, throughout the West Indies and southern Florida, in Central and South America from Mexico to Peru, as well as in Brazil and Paraguay 6.

Morphology: Moringa oleifera is a small, fast-growing evergreen or deciduous tree that usually grows as high as 9 m, with soft and white wood and corky and gummy bark. Roots have the taste of horseradish. Leaves are longitudinally cracked leaves, 30 - 75 cm long main axis and its branch jointed, glandular at joints, leaflets are glabrous and entire. The leaflets are finely hairy, green and almost hairless on the upper surface, paler and hairless beneath, with red-tinged mid-veins, with entire (not toothed) margins, and are rounded or blunt-pointed at the apex and short-pointed at the base. The twigs are finely hairy and green. Flowers are white, scented in large axillary down panicles, pods are pendulous, ribbed, seeds are 3-angled 4, 6. 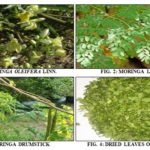 Microscopy of the Root of Moringa oleifera: 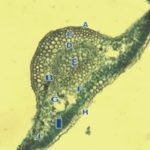 FIG. 5: TRANSVERSE SECTION OF THE LEAF OF MORINGA OLEIFERA 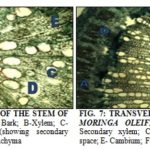 The isolation of two nitrile glycosides from the ethanolic extracts of Moringa oleifera leaves, niazirin and niazirinin and three mustard oil glycosides, 4-[(4'-O-acetylalpha-L-rhamnosyloxy) benzyl] isothiocyanate, niaziminin A, and niaziminin B. Niazirinin is a new compound. Niaziminins A and B have previously been obtained from the left extract as a mixture, while 4-[(4'- O- acetyl- alpha- l-rhamnosyloxy)benzyl]iso thiocyanate is new from this source.

The structural determination was accomplished using spectroscopic methods including appropriate 2D NMR experiments and chemical reactions. This is the first report of the isolation of nitriles, an isothiocyanate, and thiocarbamates from the same plant species 10.

Isolated six new and three synthetically known glycosides from the leaves of Moringa oleifera, employing a bioassay-directed isolation method on the ethanolic extract. Most of these compounds, bearing thiocarbamate, carbamate or nitrile groups, are fully acetylated glycosides, which are very rare in nature. Elucidation of the structures was made using chemical and spectroscopic methods, including 2D NMR techniques 11.

Isolated two new compounds from the ethanolic extract of whole pods of Moringa oliefera, O-[2'-hydroxy-3'-(2"-heptenyloxy)]-propyl undecanoate and O- ethyl- 4 [(alpha-L-rhamnosyloxy)-benzyl] carbamate along with the known substances like methyl phydroxybenzoate and beta-sitosterol 12.

Isolated a water-soluble polysaccharide from the aqueous extract of pods of Moringa oleifera. The polysaccharide contains d-galactose, 6-O-Me-D-galactose, D-galacturonic acid, l-arabinose, and l-rhamnose in a molar ratio of 1:1:1:1 23. F. Anwar and U. Rashid (2007) reported various sterols, tocopherols and fatty acids present in the seeds and seed oil from the n-hexane extract. Among the sterols, stigmasterol has the highest percentage (18.8%), whereas among the tocopherols, α – tocopherol was present in high amount (140.5 mg/kg) 18.

Traditional Uses: Traditionally, the plant is used as antispasmodic, stimulant, expectorant and diuretic. The fresh root is acrid and vesicant (has the taste of horse-radish). Internally it is used as stimulant, diuretic and antilithic. Gum is bland and mucilaginous. Seeds are acrid and stimulant. The bark is emmenagogue and even abortifacient, antifungal, antibacterial. Flowers are cholagogue, stimulant, tonic and diuretic and useful to increase the flow of bile. The plant is also a cardiac, circulatory tonic and antiseptic 21.

Pods are antipyretic, anthelmintic; fried pods are used in diabetes. Root juice is employed in the cardiac tonic, antiepileptic and used for nervous debility, asthma, enlarged liver and spleen, deep-seated inflammation and as a diuretic in calculus affection. A decoction is used as a gargle in hoarseness and sore throat. Root and fruit are antiparalytic. Leaf juice is used in hiccough (emetic in high doses); cooked leaves are given in influenza and catarrhal affections.

Root-bark is used as an antiviral, anti-inflammatory, analgesic. Stem-bark and flowers are hypo-glyceamic. Infusion of seed is anti-inflammatory, antispasmodic and diuretic, also given in venereal diseases. Along with other therapeutic applications. The Ayurvedic Pharmacopoeia of India indicated the use of the dried root bark in goitre, glycosuria and lipid disorders (also dried seeds), and leaf, seed, root bark and stem bark in the internal abscess, pile 22.

CONCLUSION: The source of many plants can often be identified from the peak pattern of the chromatograms obtained directly from headspace analysis. The present study, which reveals the presence of components in M. oleifera suggest that the contribution of these compounds on the pharmacognostic account and phytochemical investigation should be evaluated. The study confirmed that active constituents are used to treat a skin infection, cut, wounds. The plant is having the biological potential anti-inflammation, antiseptic, antimicrobial property.

AKNOWLEDGEMENT: Dr. S. N. Malode sir Head of Department (Botany), he helps me to authentify the M. oleifera species, and its different parts use, future benefits, the biological potential to treat particular diseases and also give me the authentication letter.