ABSTRACT: The present study was designed to evaluate the in vitro antioxidant effects and potential benefits of using coconut kernel extract in preventing the proliferation of human breast cancer cell line, MCF-7. Defatted extract from coconut kernel (CKf) was evaluated for its radical scavenging, prevention of human LDL oxidation, cytotoxic, apoptotic and nuclear effects on MCF-7 cells. Intracellular production of reactive oxygen species (ROS) and superoxide radical was studied. It was showed that CKf significantly scavenged free radicals and prevented LDL oxidation. MCF-7 cell viability was found to be decreased in a dose-dependent manner following treatment with CKf. AO-EB and DAPI staining confirmed that treatment with CKf, induced nuclear damage and apoptosis as distinctly visualized in cells. Our observations suggest that nuclear/cellular damage and poor mitochondrial membrane potential (MMP) appears to be an indirect consequence of the excessive generation of reactive oxygen species (ROS) and superoxide radicals.

INTRODUCTION: Purpose and Rationale: Several studies have been done on the potential anti-proliferative, and apoptotic effects of plant/fruit derived extracts on different cell lines 1, 2. Since, plants have proved to be an excellent source of bioactive molecules, many of these compounds have been developed as drugs or precursors for the design and synthesis of potent drugs.

Modulation in the levels of antioxidant enzymes, generation of reactive oxygen species, differential gene expression and activation of cell death pathways might account for a few of the mechanisms responsible for the anti-proliferative/ anti-tumor effects of such extracts 3. Coconut (Cocos nucifera) has been used in traditional folklore medicine to treat several disorders and as a functional food in different countries.

Apart from the fatty acids, coconut kernel contains proteins, fibers and several other biologically active minor components 4. It is in this light that we have attempted to investigate the effects of minor components containing coconut kernel extract, whose anti-tumor potency remains unreported till date on breast cancer cell lines in-vitro.

Radical Scavenging Assays: The stable 1, 1-diphenyl-2-picrylhydrazyl radical (DPPH) was used for the determination of free radical- the scavenging activity of CKf 5. Different concentrations of the sample were added at an equal volume to the methanolic solution of DPPH (0.135 mM). After 30 min dark incubation at room temperature, the absorbance was recorded at 517 nm. 2, 2'- azino - bis (3 - ethylbenzothiazoline - 6-sulphonic acid) (ABTS) assay was done according to the procedure described by Re et al., 6 with slight modifications. Test samples of 20 µL were allowed to react with 180 µL of ABTS+ solution for 12 min in the dark at room temperature. The free radical inhibitory activity was measured as the percentage scavenging calculated by the following formula:

In-vitro LDL Oxidation Studies: Human LDL was isolated from the plasma of healthy individuals by precipitation method using sodium citrate buffer (0.064M pH 5.04) containing 50,000 U/l heparin developed by Wieland & Seidel. Approval for the study was obtained from the Institutional Human Ethics Committee (IHEC), School of Biosciences, Mahatma Gandhi University and informed consent was given by all volunteers 7. Concentration of LDL was expressed as LDL protein measured by the method described by Lowry et al., 8 to evaluate the ability of CKf to inhibit copper (Cu) mediated LDL oxidation, samples were pre-treated with various concentration of CKf  and LDL oxidation was initiated by adding Copper Sulfate at a final concentration of 10 μM/mL. After 24 h of incubation, oxidation was terminated by the addition of 33mM EDTA. TBARS, in each tube, was estimated in each tubes by the method of Ohkawa et al., 9 Electrophoretic mobility of CKf treated LDL to detect LDL fragmentation was done using SDS PAGE (10% gradient) 10.

Cytotoxicity, Morphology and Nuclear Damage: MCF-7 cells were procured from National Centre for Cell Science (NCCS), Pune India. The cells were grown and maintained in a humidified incubator at 37 ºC under 5% CO2 atmosphere in Dulbecco’s Modified Eagle’s Medium (DMEM) supplemented with 10% foetal bovine serum (FBS). The effects of varying concentrations of CKf on cytotoxicity, nuclear integrity and morphology were visualized by staining methods. MCF-7 cells were seeded in 96 well plates at a density of 3 × 104 cells / well, and the cells were treated with CKf at varying concentrations between 12.5 - 50 mg/ml for 24 h at 37 ºC with 5% CO2. Following incubation, the wells were washed with PBS and treated with MTT for evaluating cytotoxicity. AO/EB and DAPI stains were used for studying morphology, apoptosis, nuclear shape, size, fragmentation. Cells were examined at 20x magnification using an Olympus inverted fluorescence microscope with a FITC filter 11, 12, 13.

Intracellular ROS and Superoxide Radical Measurement: Generation of excessive intra-cellular ROS following treatment of cells with extract was examined using a fluorescent probe, 2′, 7′-Dichlorofluorescein Diacetate (DCFH-DA) and superoxide radicals by MitoSOX assay 1 14, 15. Briefly, 96 well plates seeded with MCF-7 cells were allowed to become confluent and incubated with different concentrations of CKf (35 and 50 mg/ml) for 24 h. Treated cells were then washed with phosphate buffered saline (PBS) and incubated with fresh DCFH-DA (100 μM) and MitoSOX Red (5 uM) in PBS for 30 min at 37 °C in 5% CO2. Fluorescent images of cells were taken using an inverted microscope (Olympus 1 × 51).

Mitochondrial Membrane Potential Analysis: Rhodamine 123 Staining: To determine the effect of CKf on the mitochondrial electric potential across the inner membrane, rhodamine 123 (R-123), a lipophilic cationic indicator was used to label mitochondria 16). MCF-7 cells were seeded into 96-well culture plates at 1 × 104 cells/well and incubated for 24 h at 37 °C and 5% CO2. After 24h, cells were treated with different doses of CKf (35 and 50 mg/ml) for 24 h. After 24 h, R-123 solution was added into the media containing cells and incubated for 20 min. Subsequently, the cells were washed with PBS twice, and the cellular images were taken at 525 nm using the fluorescence microscope (Olympus 1 × 51).

Statistical Analyses: All the data are expressed as the mean ± standard deviation of three independent experiments. Statistical comparison was performed using SPSS 19 software via a one-way analysis of variance (ANOVA) followed by Duncan’s multiple range test (DMRT). P values of less than 0.05 (P< 0.05) were considered significant.

Based on the electrophoretic mobility assay, it was found that LDL pre-treated with a higher concentration of CKf showed a profound protective effect on apoproteins of LDL Fig. 2B. Oxidation of LDL by Cu2+ is considered a more aggressive system that transmits through Cu2+ binding, causing continuous free radical formation with reduction of lipoprotein antioxidants 17. 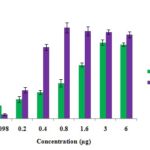 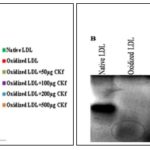 Cytotoxic Effect of CKf towards MCF-7: Changes in Nucleus and Morphology: It was observed that cytotoxicity of CKf towards MCF-7 cells was concentration- dependent. The percentage of cell death was observed to increase at a steady pace till about 25 mg/ml after which the cytotoxicity appears to be relatively absolute in all concentrations >25 mg/ml Fig. 3. Fig. 4 distinctly shows CKf treated cells with brightly fluorescing Ethidium bromide in the nucleus and periphery which is indicative of loss of membrane integrity and early apoptosis. Fig. 5 shows that CKf treated cells have different size, nuclear fragmentation patterns, and chromatin condensation compared to non-treated control cells. This indicates that nuclear damage precedes cell death following treatment with CKf. Plant-derived compounds have been reported to cause cell death in cancer cell lines by inducing DNA double-stranded breaks as a result of apoptosis 18. 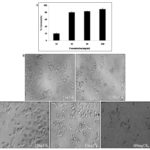 CKf Reduced the Mitochondrial Membrane Potential with Increased ROS and Superoxide Levels in MCF-7 Cells: The results showed that CKf treatment induced a dose-dependent decrease Fig. 5 in the mitochondrial membrane potential compared to the control cells which showed a very high fluorescence. The levels of intracellular ROS have risen tremendously in cells treated with the CKf. Meanwhile, the mitochondrial superoxide production in CKf treated MCF-7 cells were also found to be increased significantly compared to control cells. 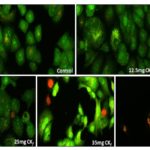 FIG. 4: ANALYSIS OF CHANGES IN CELL MORPHOLOGY AND VIABILITY OF MCF-7 CELLS TREATED WITH DIFFERENT CONCENTRATIONS OF CKf. The images were taken using a fluorescent microscope and are the representation of three independent experiments (Magnification 20x). 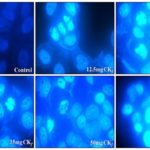 FIG. 5: ANALYSIS OF NUCLEAR DAMAGE AND CHROMATIN CHANGES IN MCF-7 CELLS TREATED WITH DIFFERENT CONCENTRATIONS OF CKf. The images were taken using a fluorescent microscope and are the representation of three independent experiments (Magnification 20x). 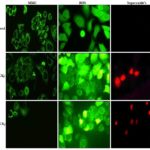 FIG. 6: ANALYSIS ON THE EFFECT OF CKf TREATMENT ON THE ROS, SUPEROXIDE PRODUCTION AND MITOCHONDRIAL MEMBRANE POTENTIAL IN MCF-7 CELLS. The images were taken using a fluorescent microscope and are the representation of three independent experiments (Magnification 20x).

DISCUSSION: The present study evaluated the antioxidant and anti-cancer activity of the defatted coconut kernel extract in a breast cancer cell line in-vitro. It was found that the extract showed significant in-vitro scavenging activity of free radicals and prevented human LDL oxidation. Previous studies in our laboratory showed that the coconut kernel extract contained polyphenolic and flavonoid class of compounds. (Unpublished data) The free radical scavenging and antioxidant activities of phenolic compounds/flavonoids are dependent upon the arrangement of functional groups about the nuclear structure. Both the number and configuration of H-donating hydroxyl groups are the main structural features influencing the antioxidant capacity of phenolics 19. CKf was found to increase the production of free radicals and decreased the mitochondrial membrane potential of MCF-7 cells. This observation indicates that drug-induced- ROS/superoxide generation in cells might contribute to the cytotoxic effect of the extract on breast cancer cell lines in-vitro. In our study, we demonstrated the effects of the methanol extract derived from the coconut kernel on the growth and viability of the breast cancer cell line, MCF-7.

These observations led us to hypothesize that the extract induced oxidative stress plays a significant role in decreasing cell viability. It is well known that the basal levels of intracellular ROS are significantly higher in cancer cells as compared to the normal cells which are what drives the growth, progression and other metabolic activities of these cells. However, the pro-carcinogenic effect of this basal ROS level can propel a cell towards apoptosis once a threshold ROS limit has been exceeded 20, 21. From our observations as depicted in Fig. 4, the cells treated with varying concentrations of extract displayed a higher threshold fluorescence in contrast to the control cells which hints at the pro-oxidant potential of the CKf in general. Generally, ROS generated as a part of regular cell metabolism is balanced by the intracellular glutathione and thioredoxin antioxidant systems.

Mitochondria are also a significant contributor to cell ROS through the flow of electrons in the electron transport chain. Considering the prospects of oxidative stress-induced cell death also prompts us to consider the possibility of compromised cellular antioxidant defenses which could be the cause of cytotoxicity 22. Our hypothesis is strengthened through the nuclear-stained images as shown in Fig. 4 which indicates the formation of apoptotic bodies and nuclear fragmentation in concentrations as low as 12.5 mg/mL which is indicative of late-stage apoptosis. The mitochondrial specific ROS probe labeled MCF-7 cells Fig. 6 showed an increased fluorescence at concentrations >35mg/ml indicating the loss of mitochondrial membrane integrity at higher doses of the extract. Compromised mitochondrial membrane potential caused by excessive stress can initiate the signaling cascade of apoptosis which could possibly account for the CKf induced cytotoxicity.

ACKNOWLEDGEMENT: This study was supported by the grant from the Coconut Development Board (CDB), Ministry of Agriculture, Government of India (Grant No.1345/ 2011). The authors are grateful to School of Biosciences, Mahatma Gandhi University and Department of Biotechnology, Government of India for the excellent research facilities supported through the prestigious DBT - MSUB - IPLS (BUILDER) programme (No.BT/PR4800/INF/22/ 152/2012).

CONFLICT OF INTEREST: The authors declare no potential conflicts of interest concerning the research and publication of this article.